CRESCO – After a two-year hiatus because of COVID-19, a crowd of 160 people gathered at the Cresco Country Club for the Iowa Wrestling Hall of Fame’s 51st Awards Banquet on Monday, April 11. Four members were inducted into the Hall to bring the total number to 137. The 2022 inductees included: Tom Hogan, Col. Thomas Huff, G. Wyatt Schultz and Chad Zaputil. Schultz died in August 2021. His wife, Kirsten, accepted the award for him.

Master of Ceremonies Dennis Meirick opened the evening by welcoming everyone to the banquet. He noted that from 1970 to 2019, a total of 133 people have been inducted into the Iowa Wrestling Hall of Fame. Among the past inductees were several Cresco natives such as: Harold Nichols, Gary Kurdelmeier, Tom Peckham, Norman Borlaug, Bob Hess, Dale Hanson and Dave Bartelma. “We are excited to have the list (of inductees to the Hall) grow to 137 tonight,” Meirick said. Jason Passmore followed with the invocation. “It’s a real privilege to be back here (in Cresco) with all the wrestling legends at this banquet,” Passmore said. “I invite everyone here to come visit the Iowa Wrestling Hall of Fame in downtown Cresco.”

Hogan inducted
Former Wartburg Coach Miller introduced the 134th inductee – Tom Hogan. He noted that Hogan was his first NCAA champion. “Tom was a key athlete on our team who helped change the wrestling culture at Wartburg,” Miller said. “Tom wanted to be pushed, and he was a good example of what we needed in our program. After college, Tom became an accomplished high school coach at Don Bosco, where he still coaches today.”

Hogan began his speech by thanking the selection committee for voting him into the hall of fame. “I’m from a small town in Iowa (Gilbertville),” Hogan said. “For me to be here with this group of wrestlers (in the hall of fame) is an honor. “I’m sorry that Wyatt (Schultz) couldn’t be here tonight with us. He was genuine and a nice guy. He promoted wrestling like no one else did,” Hogan said. He gave credit to Don Bosco High School, where he won a State Championship and took over as head coach in 2012. “I’m blessed to have spent most of my life at Don Bosco,” Hogan said. “The Don Bosco community is special and there’s something different about it (compared to other schools). My high school coach, Dan Mashek, really got the ball rolling at Don Bosco. We have the smallest school of any in Iowa (89 students grades nine through 12) with a wrestling program.”

Hogan talked about his family and friends. “My dad was a basketball player, and my mom was a cheerleader and played softball,” Hogan noted. “One year after I lost a match by one point, my dad told me that wrestler would beat me even worse next year, and he turned out to be right. My mom was more feisty. She told me, ‘You should have beaten that guy.’ My parents are both deceased, but I know they are looking down on me and they are happy. “My brothers, Mike and Dan, are both here tonight. Mike won a State Title at Don Bosco in 1979, and he got me excited about wrestling. Dan was one of my biggest cheerleaders. My sister, Kathy, was a wrestling cheerleader. My other brother, Pat, was my workout partner and mentor. I’ve very appreciative of all my siblings,” Hogan said. He also thanked his wife, Tina; his family, and all his former coaches. “I’ve had a lot of good coaches who have been mentors to me,” Hogan said. “Dan Mashek coached me in high school. Jim Miller, Bob Siddens and Tom Kettman coached me in college. I’ve been blessed. They taught me how to fight on the mat. I’m honored to be inducted into the Iowa Wrestling Hall of Fame.”

Huff honored
Chuck Yagla, a 1990 hall inductee, presented the 135th member of the
hall of fame – Col. Tom Huff. “Huff was one of the few high school wrestlers who can say he pinned Tom Peckham and Dan Gable,” Yagla noted with a smile. “Bob Siddens coached him at the University of Iowa. Bob was a great motivator in the locker room.”

“I want to thank everyone for being here,” Huff said. “My brothers, Chuck and Don, went out for wrestling at West Waterloo. Because of them, I got excited about wrestling. All I wanted to do was to be better than my brothers. “When Don won a State Championship as a freshman, I knew that I needed to win State. The family support I received my entire career has been great. I also want to thank Chuck Yagla for his encouragement,” Huff said.

Schultz joins hall
Kyle Klingman introduced the 136th member – G. Wyatt Schultz. “Wyatt Schultz made wrestling better by his presence,” Klingman said. “A wrestling meet wasn’t a meet unless Wyatt was there. He was capable of changing his surroundings. He gave to people with no expectations, and he never cared about getting any personal recognition.” Schultz’s wife, Kirsten, accepted his plaque and spoke about him.

“I want to acknowledge The Predicament (the newspaper and later website that he owned),” Kirsten said. “I want to share a speech he gave when he talked about where he came from. “He wrote, ‘I grew up on a dairy farm in Northeast Iowa. We had a hard life, which included milking cows every day and cleaning out the calf pens. We didn’t have workout or weight rooms. Doing hard physical work helped you get in shape. I appreciated the opportunity I had to wrestle and play baseball. My parents were my biggest supporters. My biggest passion was for wrestling.’

“Wyatt had the heart to do the job (of covering wrestling). He knew there was no monetary gain for The Predicament, but he wrote stories and took photos because he loved the sport.  I want to thank four individuals who helped The Predicament a great deal: Matt Lewis, Jim Thompson, Todd Hunt and Tom Danner. I also appreciate Kyle Klingman, who was a big supporter of Wyatt. “My involvement (with the website) was proofreading, taking photos when necessary and writing a column. Wyatt was glad to take on new things as long as it didn’t hurt wrestlers or the sport,” Kirsten said. She noted that Wyatt was an experienced photographer, but he was not known as a public speaker. “Wyatt always said there was nothing like small-town wrestling,” Kirsten said. “State wrestling was a show of brute strength. Wrestling is the only sport where the individual athlete is at the center of everyone’s attention. Wyatt was the voice of wrestling (through the website). Building up the kids was his top priority. One of his catchphrases was, ‘Let’s keep wrestling on the move’ and he did that,” Kirsten said.

Chad Zaputil inducted
University of Iowa Head Wrestling Coach Tom Brands gave the introduction for the 137th member – Chad Zaputil. Brands noted that former Hawkeye Coach Dan Gable was originally scheduled to induct Zaputil, but he was unable to attend the banquet, so he asked Brands to use his prepared notes to speak for him. He said that Gable had been impressed with Zaputil when he wrestled for the Hawkeyes. The coach never had any issues, except for a tattoo Zaputil had. “Chad had a wrestling move named after him – the ‘Zap Tap,’” Brands noted. “He always had such explosive horsepower as a wrestler. Fans and teammates loved Chad. Gable said that Chad is humble and was a great teammate.”

Zaputil noted that he has always loved the state of Iowa. “I’ve always had incredible support from my family and teammates,” Zaputil said. “It’s great to have them here (at the banquet). “Everyone in wrestling is a part of your family, and it’s great to be in that group. It is truly an honor to be inducted into the Iowa Wrestling Hall of Fame. “It was really special for me to wrestle at the University of Iowa under Coach Gable. Wrestling can teach you a lot of life lessons. I want to thank my friends and family for coming to the banquet,” Zaputil noted.

Meirick concluded the event by thanking all the inductees, guests in attendance, the sponsors of the banquet and all the staff at the Cresco Country Club for making the event an enjoyable night. 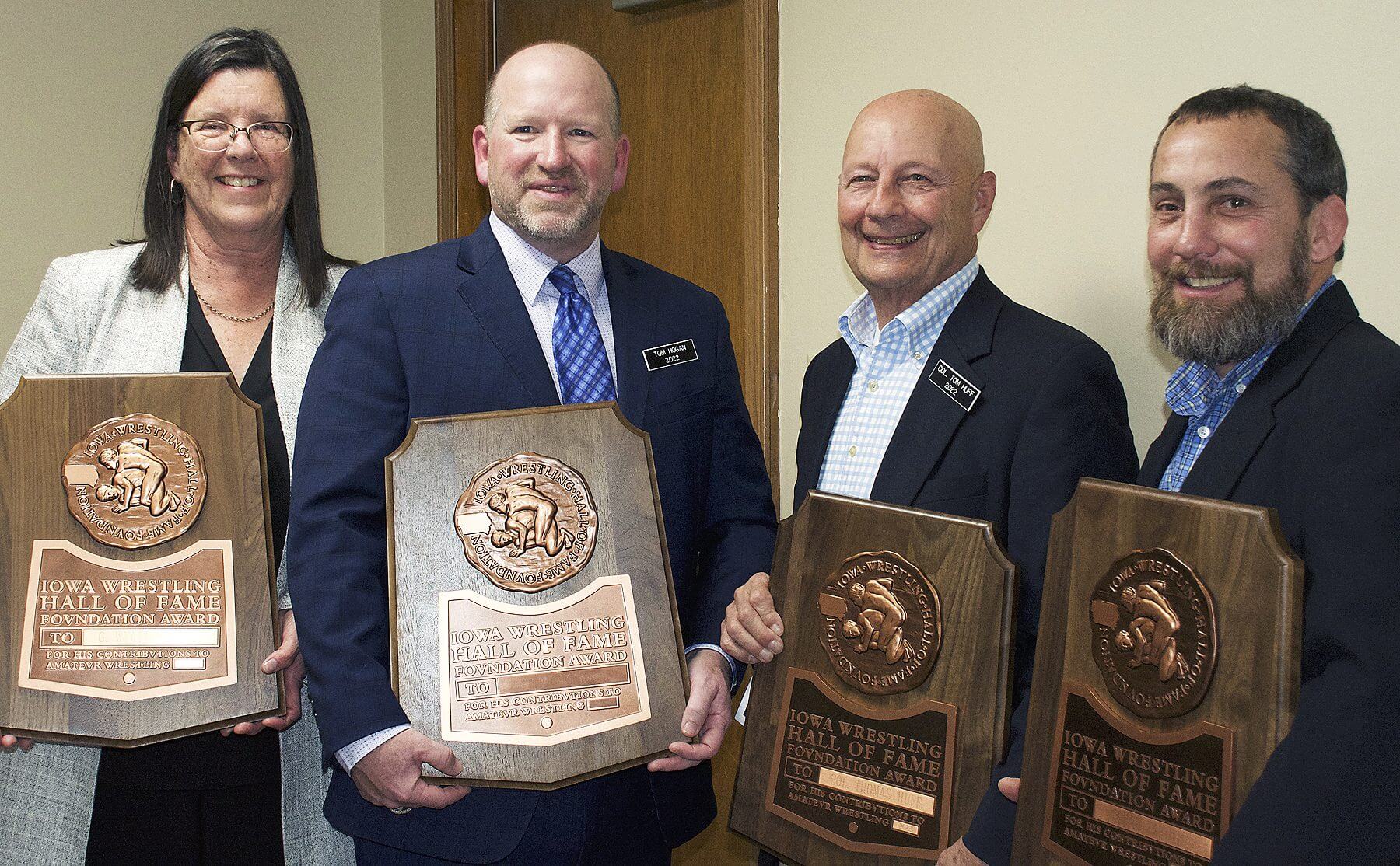 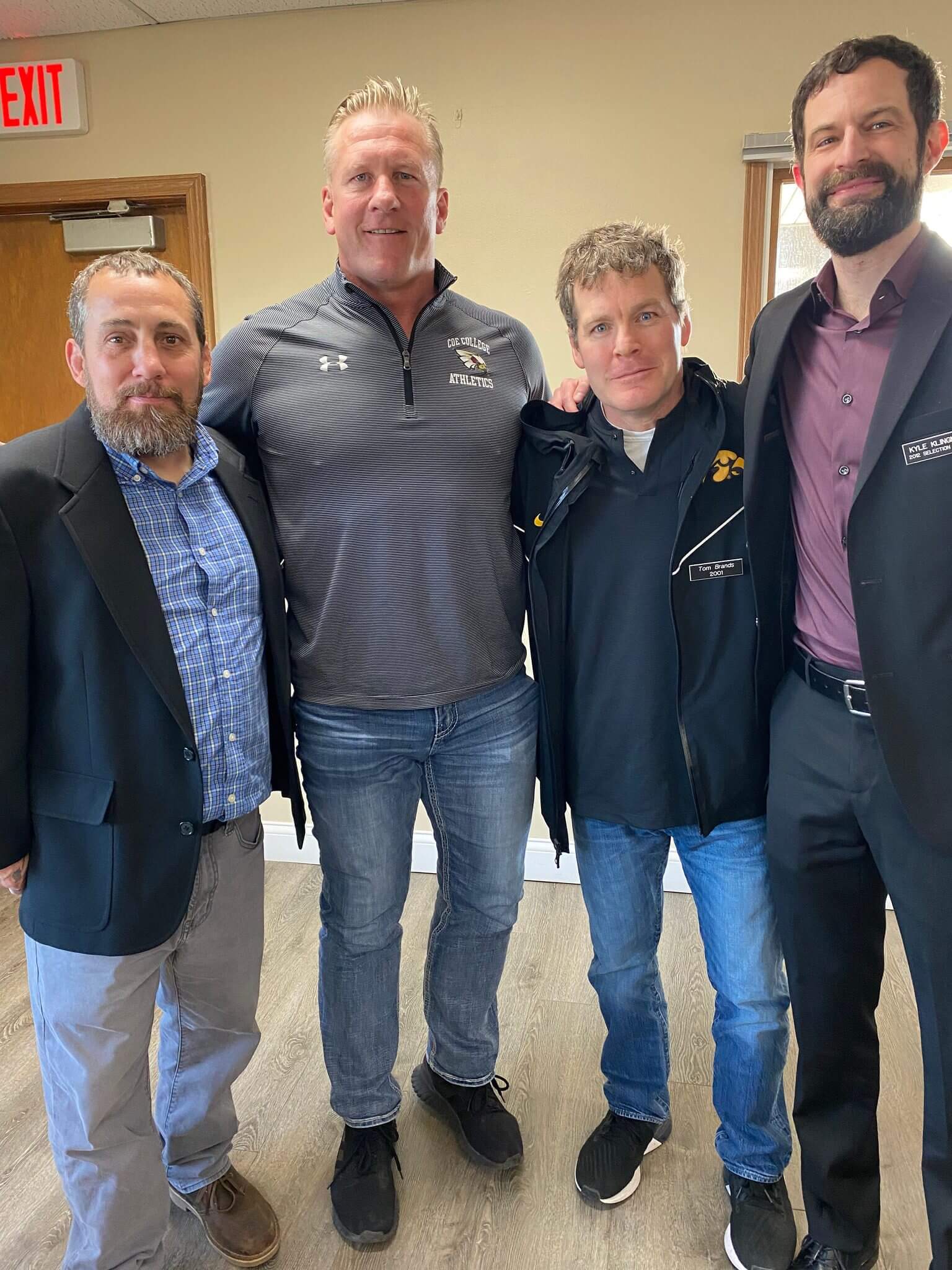 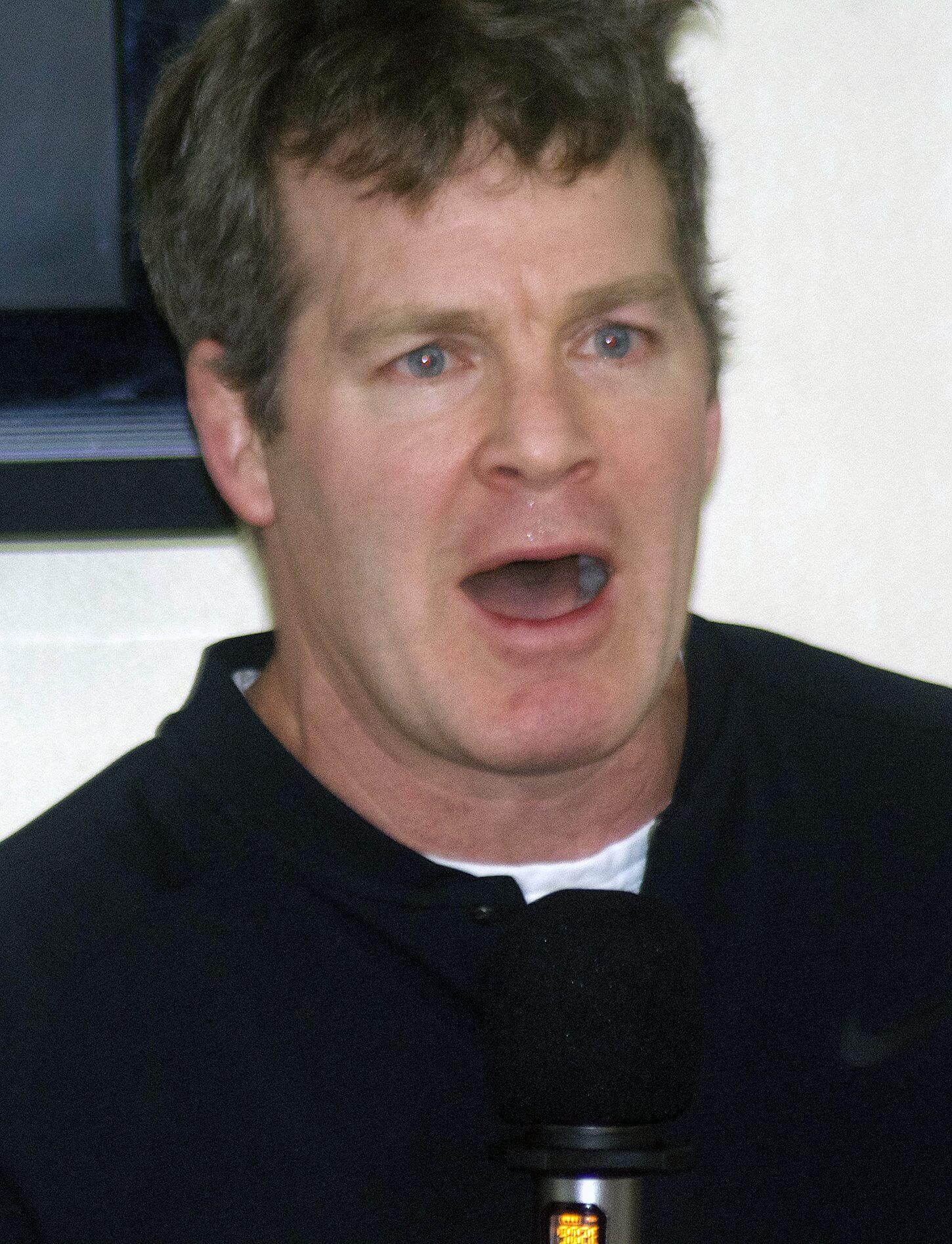 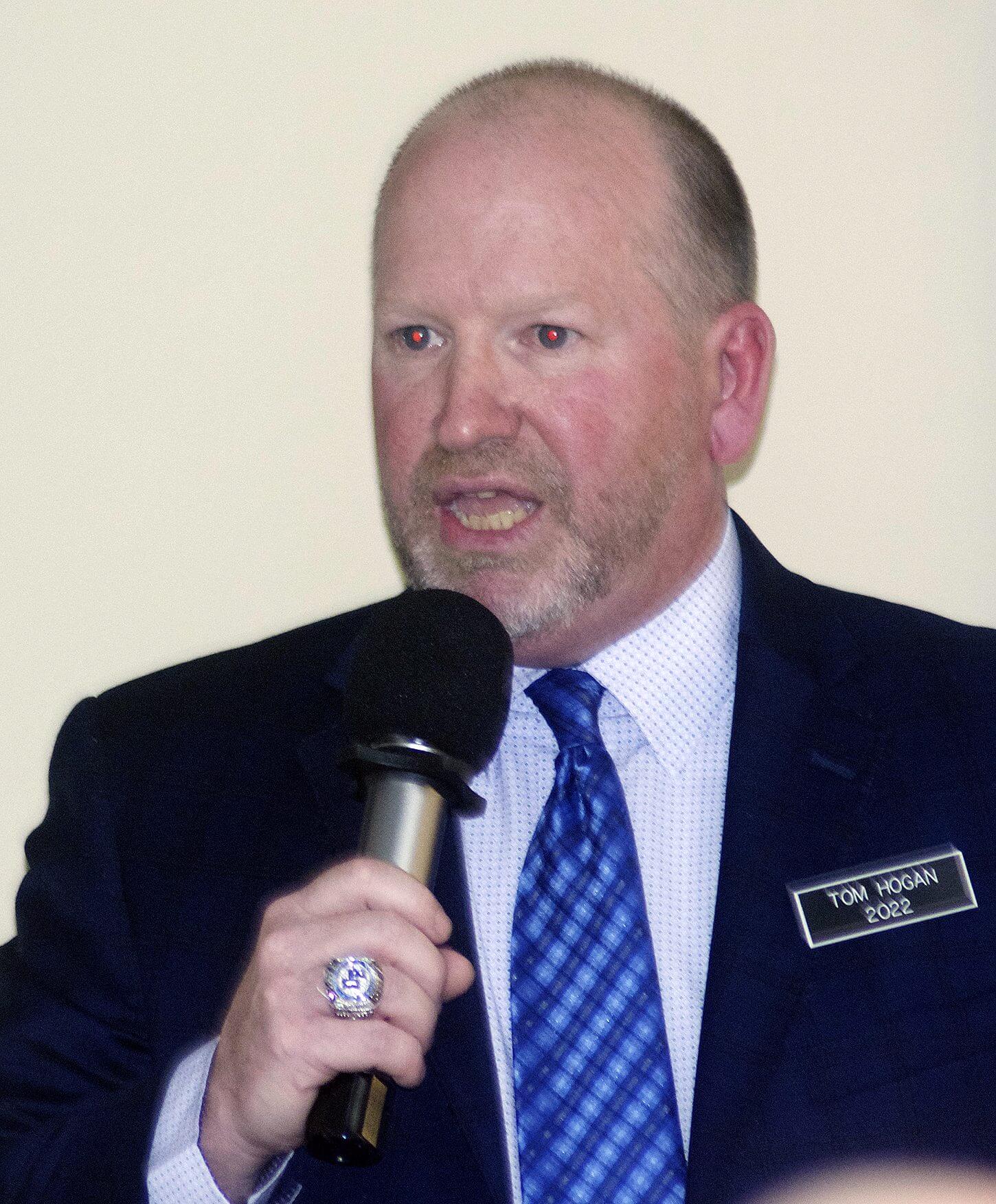 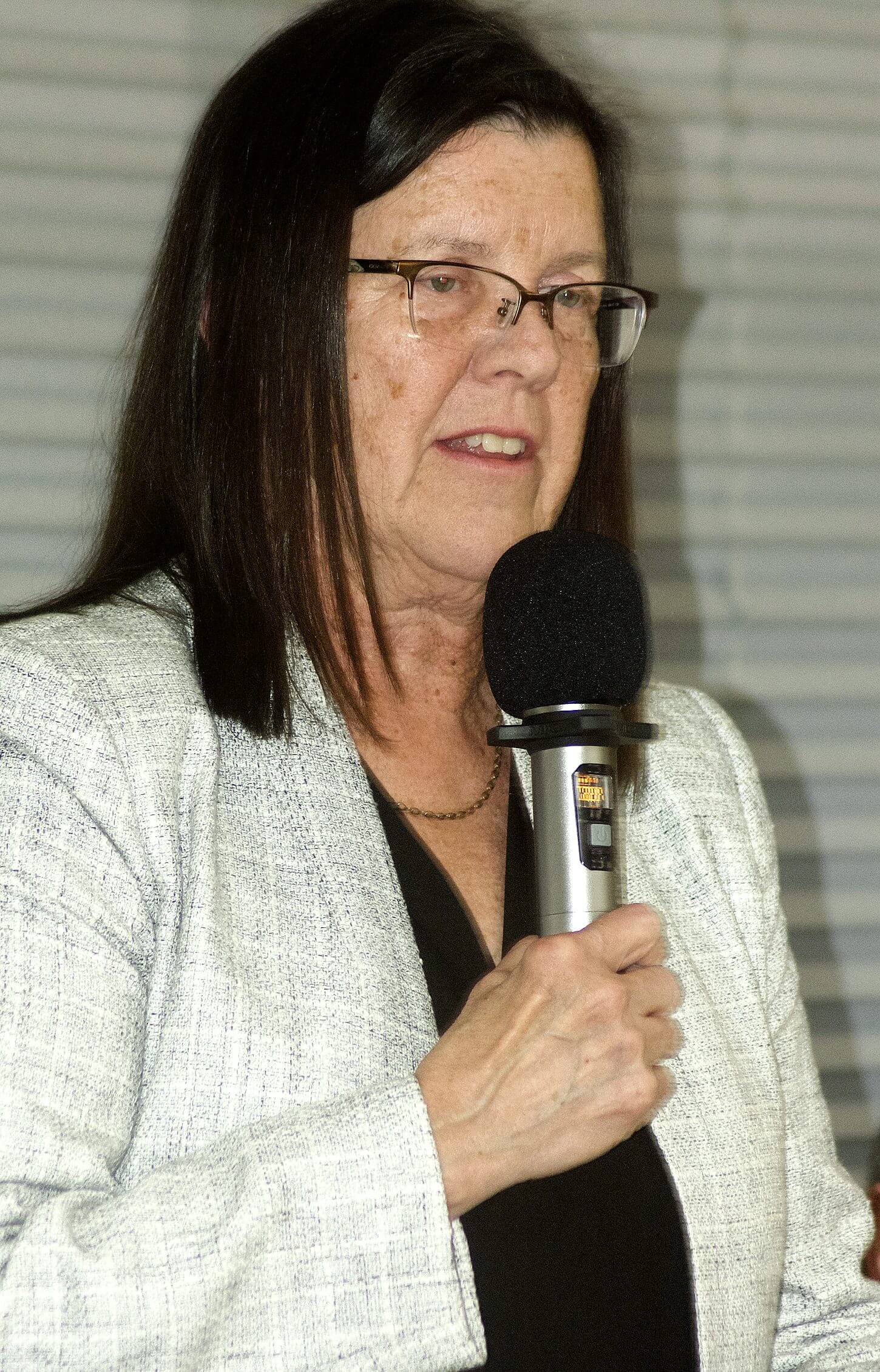 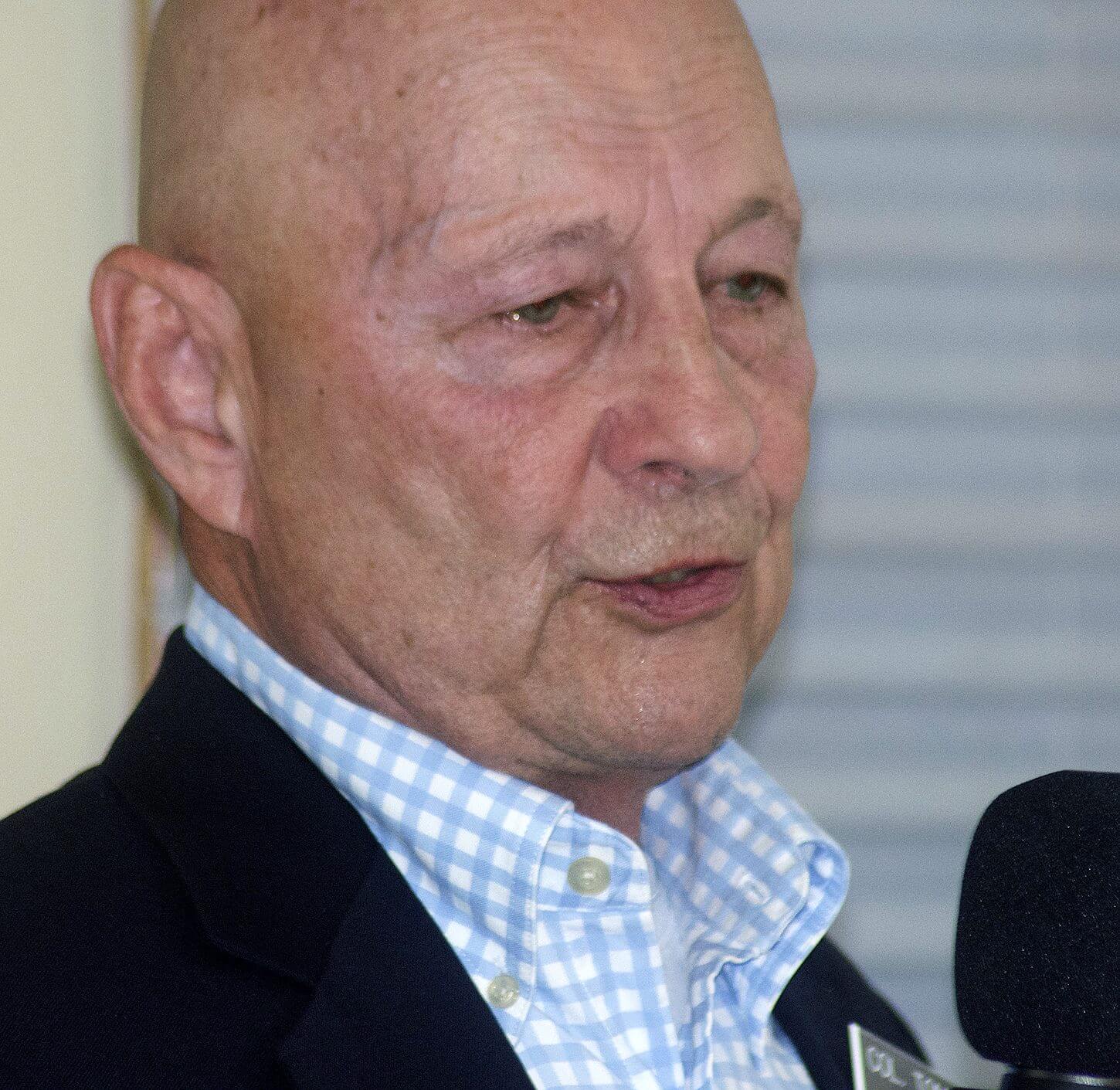 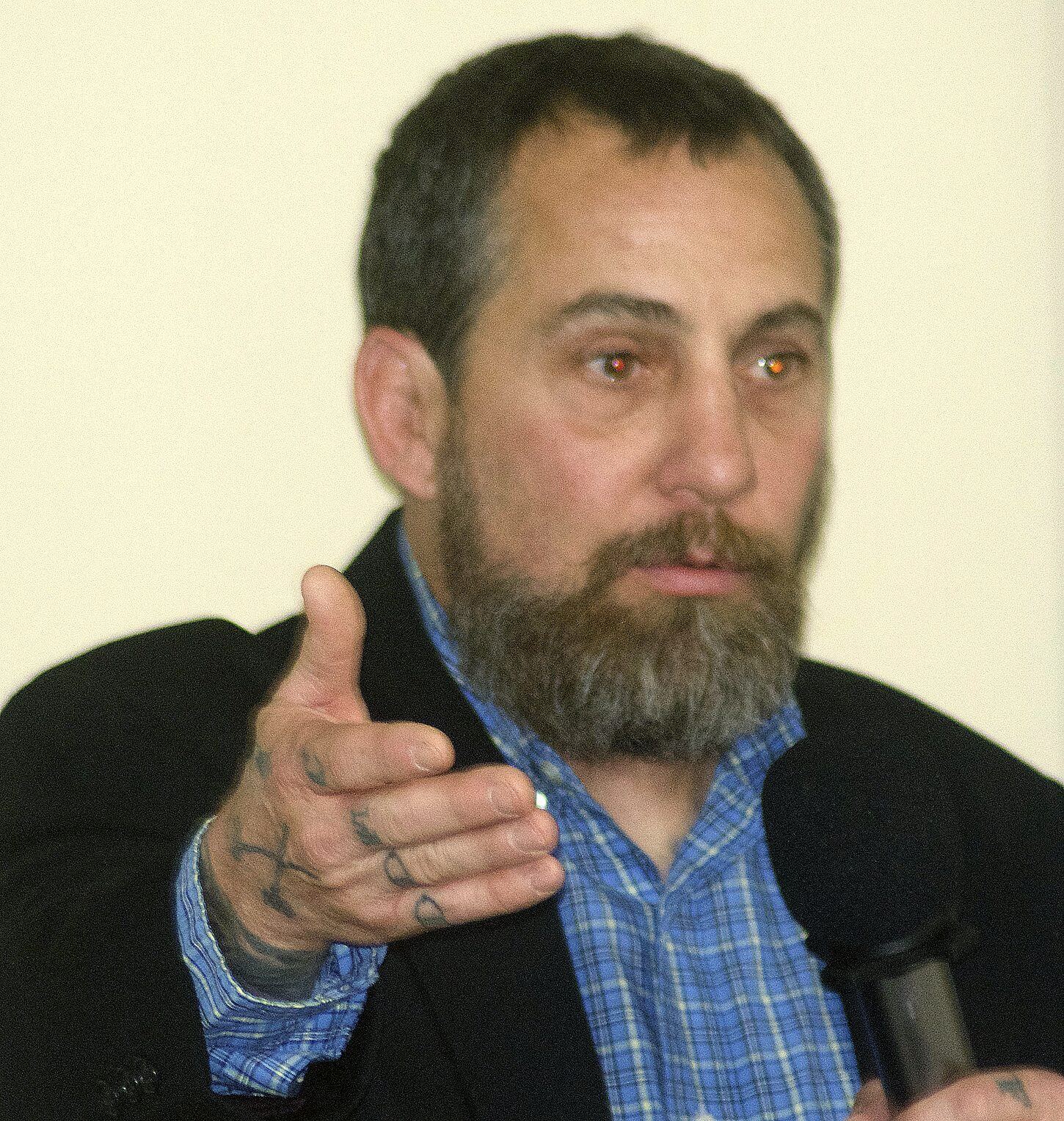 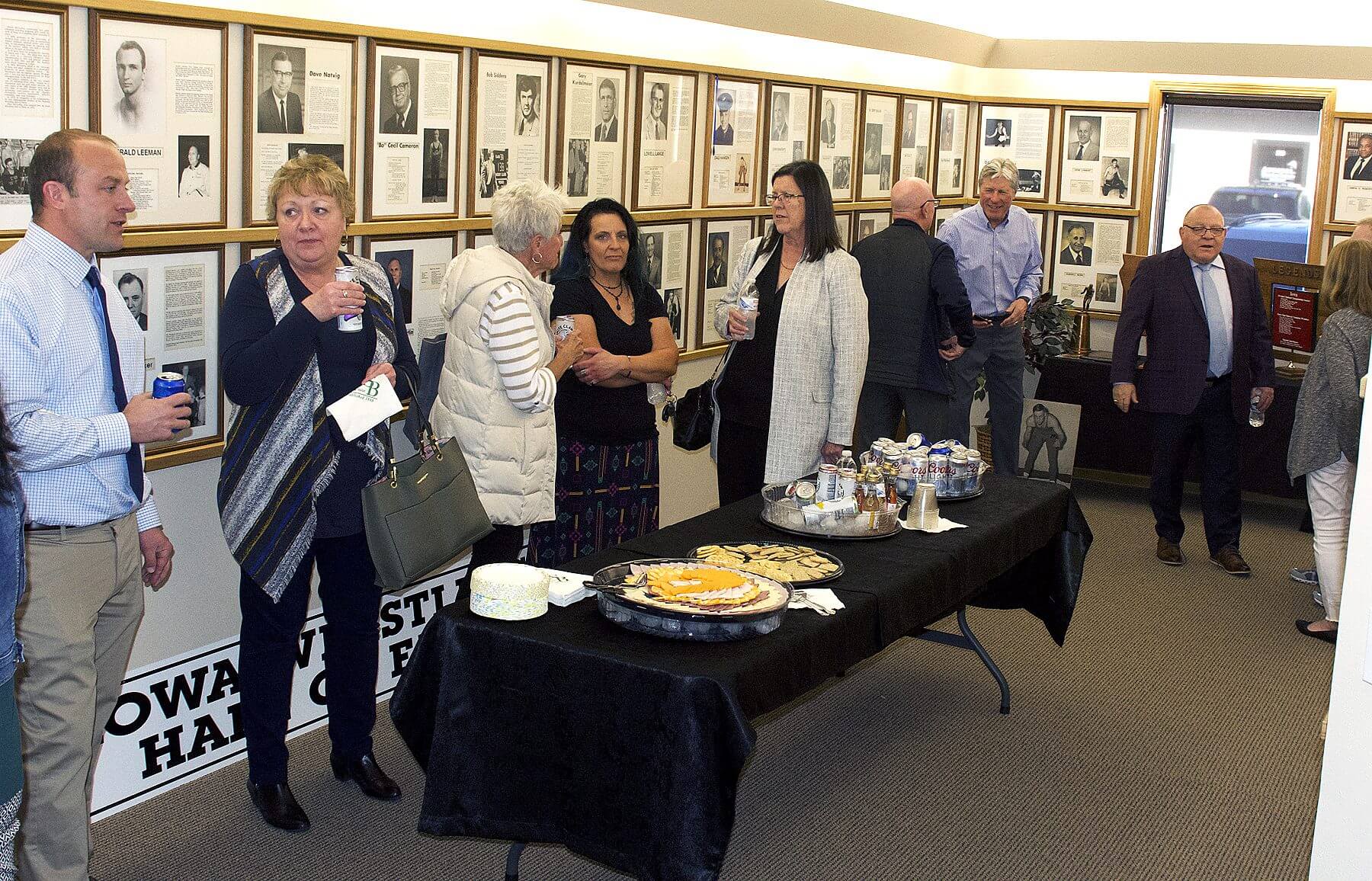 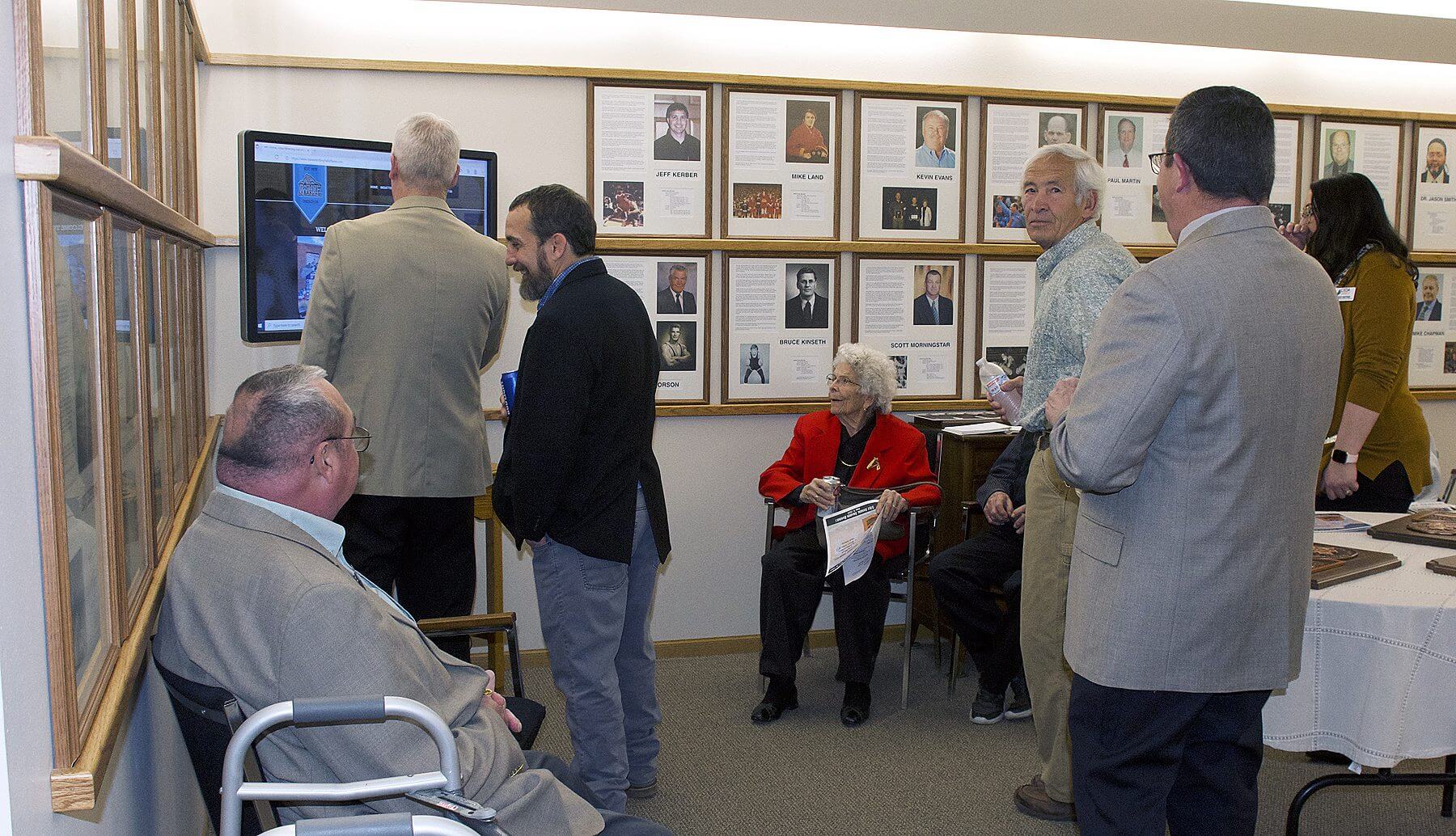