Iowa’s first four-time state champion, Bob Steenlage’s career could easily be used as a road map for any wrestler with big ambitions and the determination to make things happen.

“I did lots of farm work and running to prepare me, but my biggest asset was my determination and learning how to think positively at all times on and off the mat.” Bob said in the book about him, “Fighting Back”, “I had to admit to myself from the very beginning that I was not a gifted wrestler. I honestly was only slightly better than average, with a big heart. But, I also recognized that lack of ability did not have to be a hindrance, and shouldn’t be dwelled on.  I became a great student of how people think that have become highly successful regardless of their obstacles.”

Described by many as “The Pencil”, Steenlage’s titles came in close hard-fought decisions. He won his title as freshman 2-0 and his sophomore title 4-0. His senior year, with the entire state watching, Steenlage won a referee’s decision by riding time to become the state’s first four-time champion, not to be repeated for another 17 years. In the match before his bid for his fourth title Steenlage separated his shoulder, although the seriousness of this injury was not known until after the tournament.  Also, in his senior year he spent four weeks on the sidelines with a back injury most believed was career-ending, and only began to work out again ten days before the tournament began.  This was a great obstacle to overcome, as his shape was one of his main strengths, and forced Bob to bring his mental preparation to another level.  His career record at Britt was 74-7-5.

Steenlage went on to the West Point Military Academy where he went four years without being beat in a dual meet. While at the academy he was a two-time NCAA qualifier at 130 pounds while placing third at 123 pounds in 1966. Two memorable matches during that stint included a 7-2 over Mike Caruso. Caruso was a three-time NCAA champion and that loss was the only loss Caruso ever suffered in High School or college. Steenlage also defeated Mike Johnson of Pitt in the finals of the Easterns in 1965. Johnson was the first wrestler in the U.S. to win four state wrestling titles. Steenlage was the second ever to accomplish this one year later.

Bob also was a member of the 1966 NCAA Div. I All-American wrestling team, a captain of the West Point wrestling team, a graduate of the army’s elite Airborn and Ranger Schools, a platoon leader and company commander in Vietnam in 1968 and was awarded the Bronze Star.  In the Vietnam War, one of every twenty of Bob’s West Point classmates were killed and one of every six were wounded or maimed.  There is a very famous book written about Bob’s West Point class called, “The Long Gay Line, The American Journey of West Point’s Class of 1966” by Rick Atkinson.

He cited having a big heart, fanatic trainer and being highly disciplined, and learning how to control his thoughts, as keys to his success. While also being very strict about his weight cutting, he also noted that working for his father’s acceptance was very instrumental in his success.

Bob simply states, “The most important human quality a person should manifest at all times is an ‘Attitude of Gratitude” and the greatest freedom we have is freedom to choose our attitude, regardless of the circumstances. Never, Never, Never give up!.”

Bob enjoys talking with wrestlers or anyone else who could use a boost of encouragement over the phone or in person.  Just give Bob a call and/or tell him whom you would like him to call and the phone number.  (Bob can be reached at 608-323-2065 / 8199 / 0243).  View his website www.bobsteenlage.com for contact information and more on Bob’s presentations and personal development opportunities, and his book, “Fighting Back.”  His biography is written by Mike Chapman, who was inducted into the Iowa Wrestling Hall of Fame in 2010.

Bob would like all to know about a Personal Development program he conducts for coaches, wrestlers, or anyone else Thursday nights at 9 PM ET, 8 CT, 7 MT, and 6 PT.  Just call the following conference call line: 712-432-2900, pin 635-261#.  You can email Bob at bob.steenlage@freelifeleader.com.

In the picture below Coach Dale Brand of Clarion is refereeing in Bob’s win over Obie Saddler of East Waterloo.  Britt defeated East Waterloo 23-13 that cold night in January of 1961.  Bob remembers one of the East Waterloo wrestlers saying after the loss, “I can’t understand this…..our bus is longer than Britt’s main street!”

Bob  was inducted into the Iowa Wrestling Hall of Fame in 2005 along with Dick Black, Royce Alger, and Mike McCready. 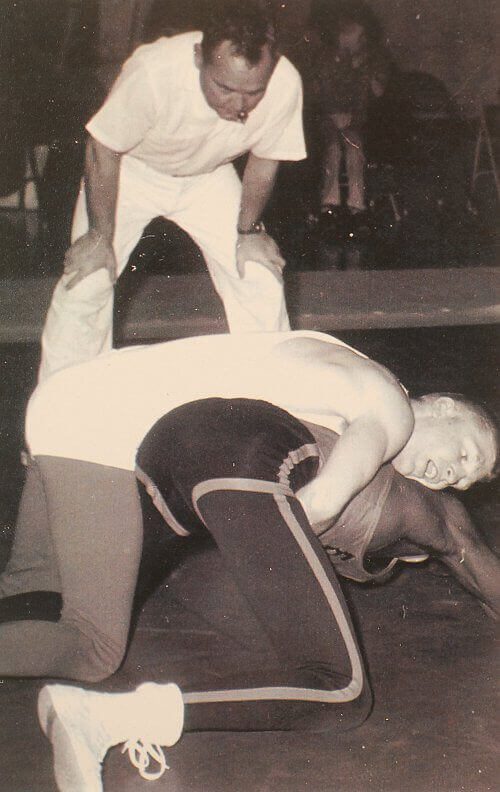 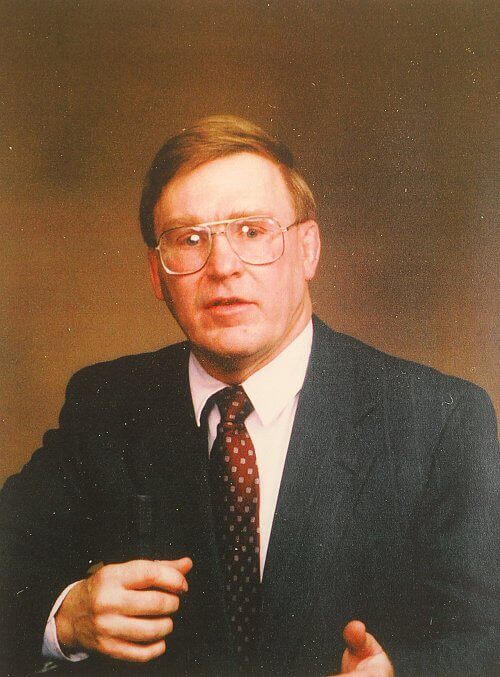