William H. “Bill” Koll was born at Fort Dodge, Iowa. He started his wrestling career under Coach Fred Cooper at Fort Dodge High School where he placed third in the State High School Wrestling Tournament in 1940 and was a state champion at 135 pounds in 1941.

Bill continued his education and wrestling at Iowa State Teachers College (University of Northern Iowa) where his coach was Dave McCuskey. College and wrestling activities has to be put on hold after the outbreak of World War II as Bill spent 34 months in the Army (1943-45 with the 149th Engineers Battalion). He returned to Iowa State Teachers College in 1945 to continue his education and embark on an outstanding career in wrestling and coaching.

Bill Koll won the NCAA title three consecutive years-the first Iowan to accomplish this feat. He was also the first wrestler to be named as the NCAA Tournament Outstanding Wrestler two times. He was undefeated in college and NCAA competition and was a member of the 1948 Olympic team.

Our inducted graduated from Iowa State Teachers College in 1948 and immediately set out to further his education and start his coaching career. Bill coached and taught at five schools: the University of Chicago (3 years), Cornell College in Mt. Vernon (1 year), the University of Northern Iowa (12 years), and Penn State (14 years). Bill retired from coaching in 1978.

Mr. Koll was inducted into the Iowa Wrestling Hall of Fame in 1975. 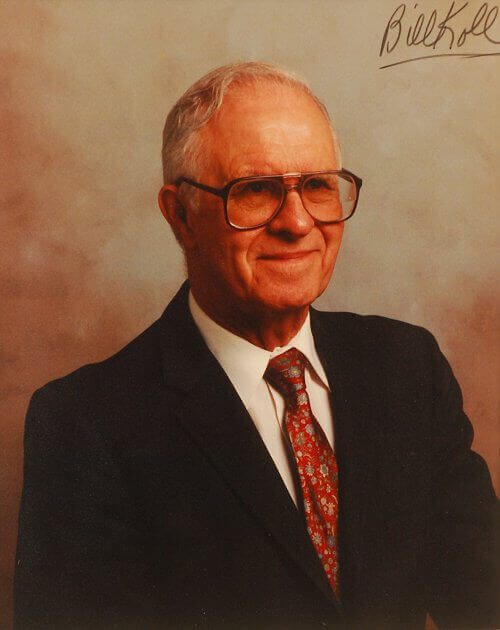