Others have followed, but Bob Hess helped to start the tradition of excellence that has long been associated with Cresco wrestling.

Hess was an important member on Cresco’s earliest teams.

In 1927, he became the third member of the Cresco team to earn a state championship under coach Henry Pillard, winning the title at 135 pounds. That year marked Cresco’s first finish among the top four teams at the state tournament when they came in third.

There was no state title for Hess in 1928, but his second place at 145 in the state tournament was a key contributor to Cresco’s first-ever state team championship. Dropping down to 135, he finished second in the Midwest Amateur Athletic Union tournament as well that year.

After high school, Hess entered Iowa State and his competitive career took off.

Hess did not lose a match after that. In 1932, he was the 174 pound champion in both the National Collegiate and AAU meet, as well as the State Collegiate champion at 175.

By winning the AAU title that year, he earned a spot on the U.S. Olympic team and placed fourth in the international event at Los Angeles.

He continued his willing ways into 1933, adding four more titles at 175-the Big Six Tournament, the Midwest AAU, the State “Open” YMCA Tournament, and the National Collegiate Meet. He also claimed the National AAU crown at 165 that year.

As well as being a fine athlete, Hess was an excellent student. During his career, he was awarded the Big Six Athletic-Scholarship Medal and the Iowa State College Honor Athletic Award.

Hess’ wrestling career ended at the 1933 season, but he became well-know across the country as a scientist in wood products.

Robert Hess was inducted into the Iowa Wrestling Hall of Fame in 1970. 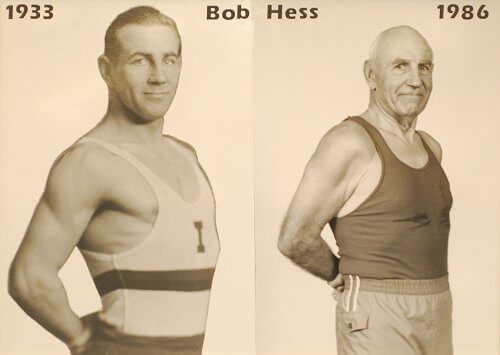