Luverne Klar graduated from Osage High School in 1941. He had an outstanding high school wrestling career under “Mitch” Mitchell, his high school coach. His Osage teams were undefeated during Klar’s four years as a member of the team. They were State Team champions in 1940 and State Team Runner-up in 1941. Klar was State Champion at 118 pounds in 1941.

World War II interrupted Klar’s education and wrestling career but got back into the fold in 1947 when he enrolled at Iowa State Teachers College (UNI) and joined the wrestling program under Dave McCuskey. He became associated with an outstanding group of wrestlers which included Iowa Wrestling Hall of Famers Keith Young, Bill Smith, Bill Nelson, Germ Leeman, Russ Bush, Bob Siddens, and their coach Dave McCuskey. This group had an outstanding team record. This team finished second in the 1949 NCAA tournament and were team champions in 1950. Klar placed third at 136 pounds in the NCAA tournament in 1949 and was fourth in 1950 at 120 pounds. He was a two time All-American.

Laverne graduated from Iowa State Teachers College in 1950 and embarked on a coaching career that lasted for thirty six years. He coached the ISTC campus team in 1950-51 and started the wrestling program at Mankato, Minnesota High School (renamed Mankato West) in the fall of 1951 and coached there through 1986-87.

Klar’s teams had 359 dual meet wins, 158 losses, and 11 ties for a .690 winning percentage. The 359 wins ties him for 12th on the national all-time listing for wrestling coaches. His Mankato teams won one state title in 1964, was runner-up six times, and 3rd or 4th many years. He coached fifteen individual state champions. 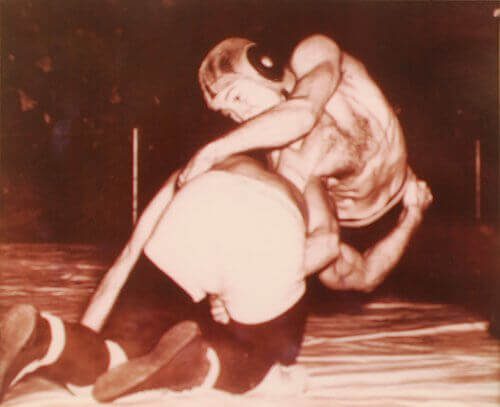