Any fan who counts the years of interest in wrestling by the decades instead of years knows first-hand how wrestling has changed.

Kevin Evans, only second non-wrestler to be inducted into the Iowa Wrestling Hall of Fame, took his love of the sport a few giant steps forward by reporting on the changes for over four decades at the Waterloo Courier.

His involvement in wrestling is easily seen when Evans notes with pride that he never missed a state wrestling tournament from 1964 to 2006. From 1966 through 2006 he worked at the tournaments writing articles for the Waterloo Courier, the last 16 years as the Sports Editor. “I never missed a single session during those years and wrote close to 1,000 stories during that time,” he added.

Changes he has seen in the sport are for the most part positive. “There is a lot more action now than in the past. It’s more fan friendly. Years ago a guy could grab an ankle (from the top position) and hold on for a week without getting called for it,” Evans noted. He also said the weighing in just before wrestling has eliminated drastic weight cutting and made matches more unpredictable.

Sports specialization is perhaps one change Evans isn’t fond of. “I’m not a fan of it but it’s almost required now. I like wide exposure other sports offer. What can be learned from one sport can help you in wrestling but good wrestling almost requires 12 months, and seven days a week anymore.”

Evans also noted he ran the first statewide high school teams wrestling ratings in the late 1960’s and 1970’s. Unlike today when technology makes things fairly easy, he sent four paper ballots to every wrestling school in the state and tabulated the results four times a year.

Evans was inducted into the Hall of Fame in 2008 along with Mark Schwab, Scott Morningstar and Greg Randall. 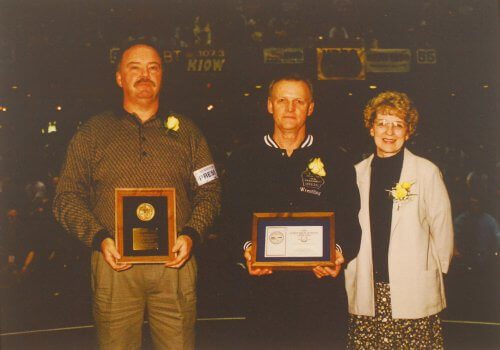