Joe Gibbons and Iowa high school wrestling are as synonymous as Tiger Woods and golf.

After moving to Ames for his junior and senior years, Joe won the 126 pound title with a 23-3 record and followed that up with a perfect 28-0 record his senior year on his way to the 132 pound title. Joe was among only a hand-full of wrestlers to ever win four Iowa titles in 1981. His high school record was an impressive 105-5.

Joe actually won 12 state titles during his career as he also won four state freestyle titles and four Greco-Roman state titles. He was named the number one recruit in the country his senior year; was captain of the Dream team and named outstanding wrestler of the 1981 USWF tournament.

He followed up his sensational high school career by winning the prestigious Midlands tournament at 126 pounds his freshman year while at Iowa State University. He finished his freshman year in college placing fourth in the NCAA tournament. He followed that up with another fourth place finish at the nationals as a sophomore at 142 pounds. He went 53-3 his junior year on his way to his national title while placing third in the nation as a senior. He was a two-time big Eight champion. His collegiate record was 124-20-3.

Joe takes pride in having the most wins in a single season while at ISU with 53 and that he was Harold Nichols’ last NCAA champion. He credits great coaching, growing up in the great wrestling environment of Iowa and great workout partners for his success.

Joe was also an assistant coach for his brother when the Cyclones won the 1987 NCAA team title.

Joe was inducted into the Iowa Wrestling Hall of Fame with his brother Jim and uncle Joe Frank in 2003. 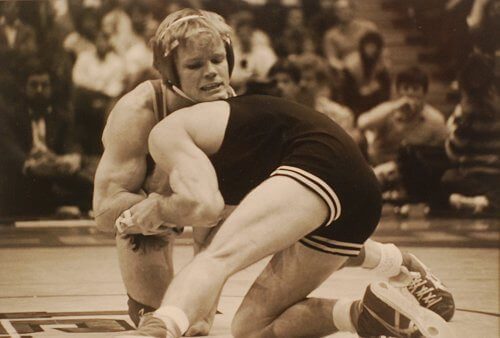