CRESCO – A capacity crowd at the Cresco Country Club witnessed the induction of four new members into the Iowa Wrestling Hall of Fame on Monday, April 9, during the 49th Annual Awards Banquet.

The newest members of the hall included: Steve Hamilton, Shane Light, Kirk Myers and Lennie Zalesky. With the induction of these four members, the Iowa Wrestling Hall of Fame now has 129 total members.

Dennis Meirick, a member of the Board of Directors, served as the Master of Ceremonies for the awards banquet. After welcoming the crowd, he noted that many of the past inductees had ties to Cresco, including former Cresco High School coaches Dave Bartelma and George ‘Chris’ Flanagan. Meirick then recognized Don Gooder, who played a role in helping to start the Iowa Wrestling Hall of Fame in Cresco.

Following Meirick’s remarks, Board of Directors member Jason Passmore thanked everyone for coming and noted that anyone in the crowd was welcome to visit the Iowa Wrestling Hall of Fame in downtown Cresco. After he thanked the Board of Directors, Passmore led the invocation before the meal.

Meirick then pointed out that three college coaches were at the banquet including: Brent Metcalf from Iowa State, Ryan Morningstar from Iowa and Dave Mitchell from Luther. Meirick also recognized many former inductees in attendance.

Selection members Jim Gibbons introduced the 126th inductee: Steve Hamilton, who won two State titles at Emmetsburg before becoming a four-time All-American at Iowa State. Gibbons shared a few memories he had of visiting Cresco before talking about Hamilton. Gibbons, who coached Hamilton at Iowa State, noted that Steve had fantastic parents. “Steve grew up in a tough environment, but that was OK. I loved coaching Steve, and he developed into a fine wrestler. Steve really left a great mark (at Iowa State).” Hamilton began his speech by saying it was a “great honor” to join the hall. “It’s a big deal for me to be inducted,” Hamilton said. “Years ago, I called Jay Robinson to ask for advice about coaching. Jay told me I needed to find heroes for kids. “I was blessed to grow up where I did (in Emmetsburg). I remember watching the State Wrestling Meet when I was nine years old. We take it for granted in Iowa, but having the chance to watch wrestling meets leaves a major imprint on kids. “I was surrounded by people who encouraged me (during my wrestling career). People around me saw someing in me that I didn’t see. I was surrounded by a lot of positive people,” Hamilton said. He thanked his family for their encouragement when he was growing up. “My mom had arthritis,” Hamilton said. “I gained a great work ethic from my mom, who was a tough, hard-nosed person. For me, wrestling was easy after seeing what my mom went through at home. “My brother, Pat, also helped me a lot because he never gave me an easy pass. One year in high school, I took third at State and Pat ragged on me for that. He kept pushing me and held me to a higher expectation. I also want to thank my high school coach Clint Young, who taught me how to train during wrestling. The reason I was successful in wrestling was because of where I came from,” Hamilton said.

Lisbon Wrestling Coach Brad Smith introduced the 127th inductee: Shane Light, who was a four-time State Champion at Lisbon. Smith noted that in 1990, Shane and his two brothers all competed at the State Wrestling Tournament. Smith said Light faced some adversity in high school, which included knee surgery, but he came through those tough times even stronger. Light started his speech by giving kudos to the Board of Directors. “At Lisbon, we have a huge wrestling tradition,” Light said. “I want to thank all my family and friends for their support. I give thanks to my coaches, especially Brad Smith, who took the Lisbon program to a great level. I want to thank my wife for being my number one supporter. I’m also thankful I could coach my daughters in sports. “I’m thankful to my two brothers. The highlight of my career was being on the team with my brothers. Out of the three of us, I was the skinny kid who would out-slink you on the mat. Growing up, my three idols were Coach Smith, and my cousins, Vance and Greg. I give the most thanks to my dad, Rudy; and my uncle, George. I do everything for my family. This award is for us,” Light said.

Jim Miller introduced the 128th inductee: Kirk Myers. At Algona High School, Myers won a State title as a senior. Competing at UNI, Myers won three Division II national titles. Miller noted that Myers was a testament to young people who achieve their potential years later. Myers congratulated the other Hall of Fame inductees. “I was lucky to have parents who were willing to take me to Britt (for a tournament),” Myers said. “I want to recognize Coach Briggs and Coach Kueker at Algona for their help. I want to thank my four brothers, my sister and her husband. “Our family had a strong work ethic, which came from our mom. I also want to thank my UNI teammates. Joining the Hall of Fame is a big honor, and I appreciate it,” Myers said.

Former Iowa Coach Dan Gable introduced the 129th inductee: Lennie Zalesky. Gable coached Zalesky at Iowa where he won three Big Ten titles and earned All-American honors three times. Zalesky also won a State title at Cedar Rapids Prairie. “Lennie and his brothers helped build a dynasty at Iowa,” Gable said. “Lennie had been all over. He coached in Alaska, the University of Indiana and in California. Lennie is doing a great job of looking out for the sport of wrestling. It was my honor to coach Lennie at Iowa.” Lennie noted that even though he and his family are currently living in California, he is an Iowan at heart. “I’ve always had a passion for wrestling,” Zalesky said. “Every job I’ve had has been the result of wrestling. “I’m not a typical wrestler. I started out playing basketball before a friend convinced me to go out for wrestling. I loved the sport of wrestling immediately. “I couldn’t imagine a better place to grow up as a wrestling fan than in Iowa. Our gyms were always filled for wrestling meets. I grew up in an area that had a lot of wrestling talent. Wrestling at Iowa was great for me. “I left (the state) of Iowa in 1990, but everywhere I go, people talk about how great the people in Iowa are. When I was in Russia, I talked to a coach there. He told me that he had never met better people than the ones he met from Iowa. “I want to thank my late parents, who were very supportive. I want to thank Coach Gable, who has great intensity and the ability to connect with people. I give thanks to Chuck Yagla and Brad Smith. I also want to thank my family, friends and my wife, Maria, who is a great supporter. I give thanks to the Board of Directors,” Zalesky said. 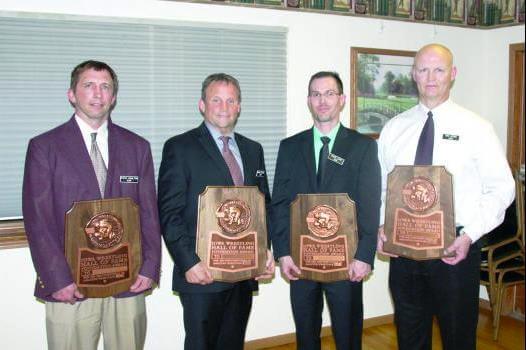 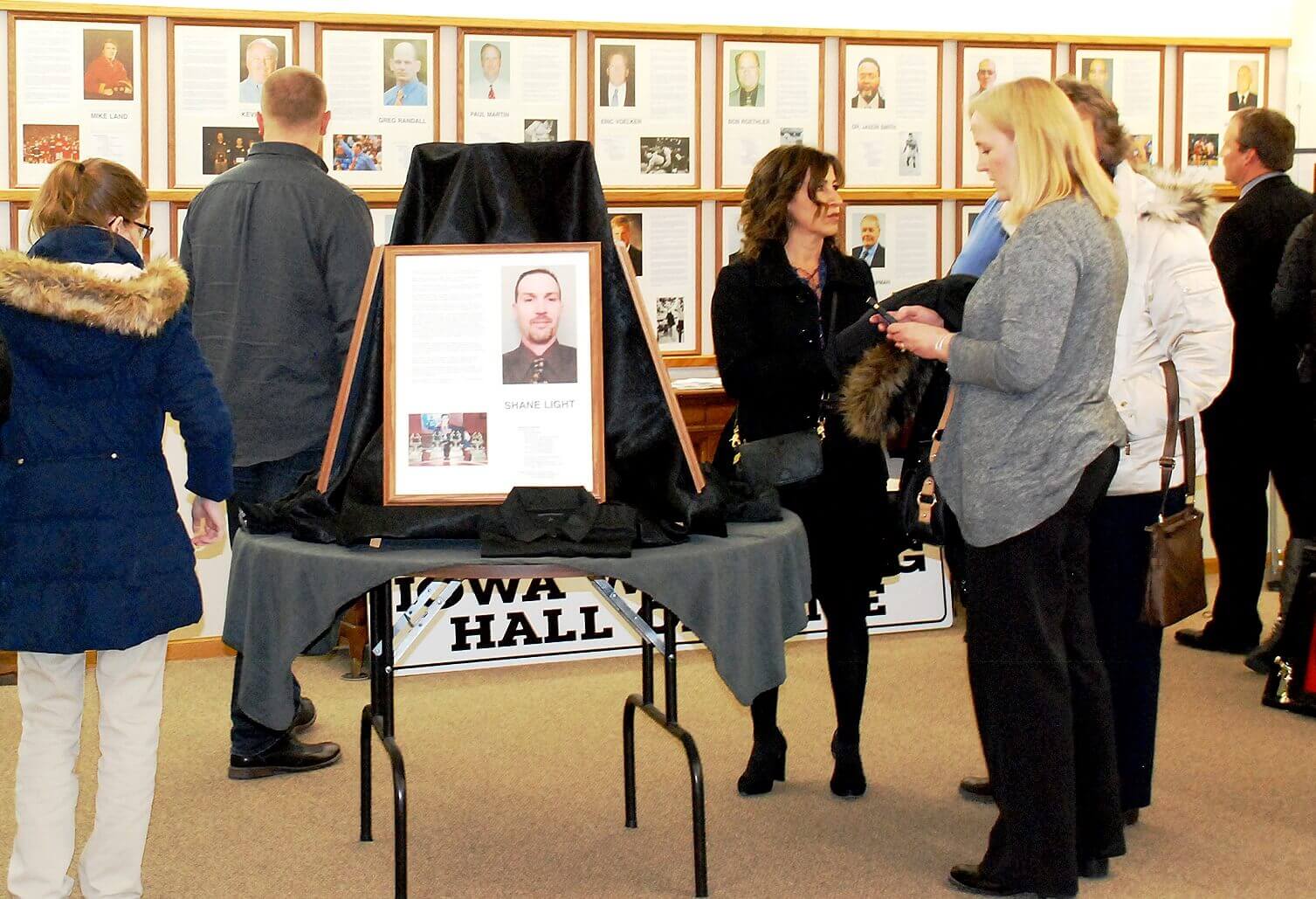 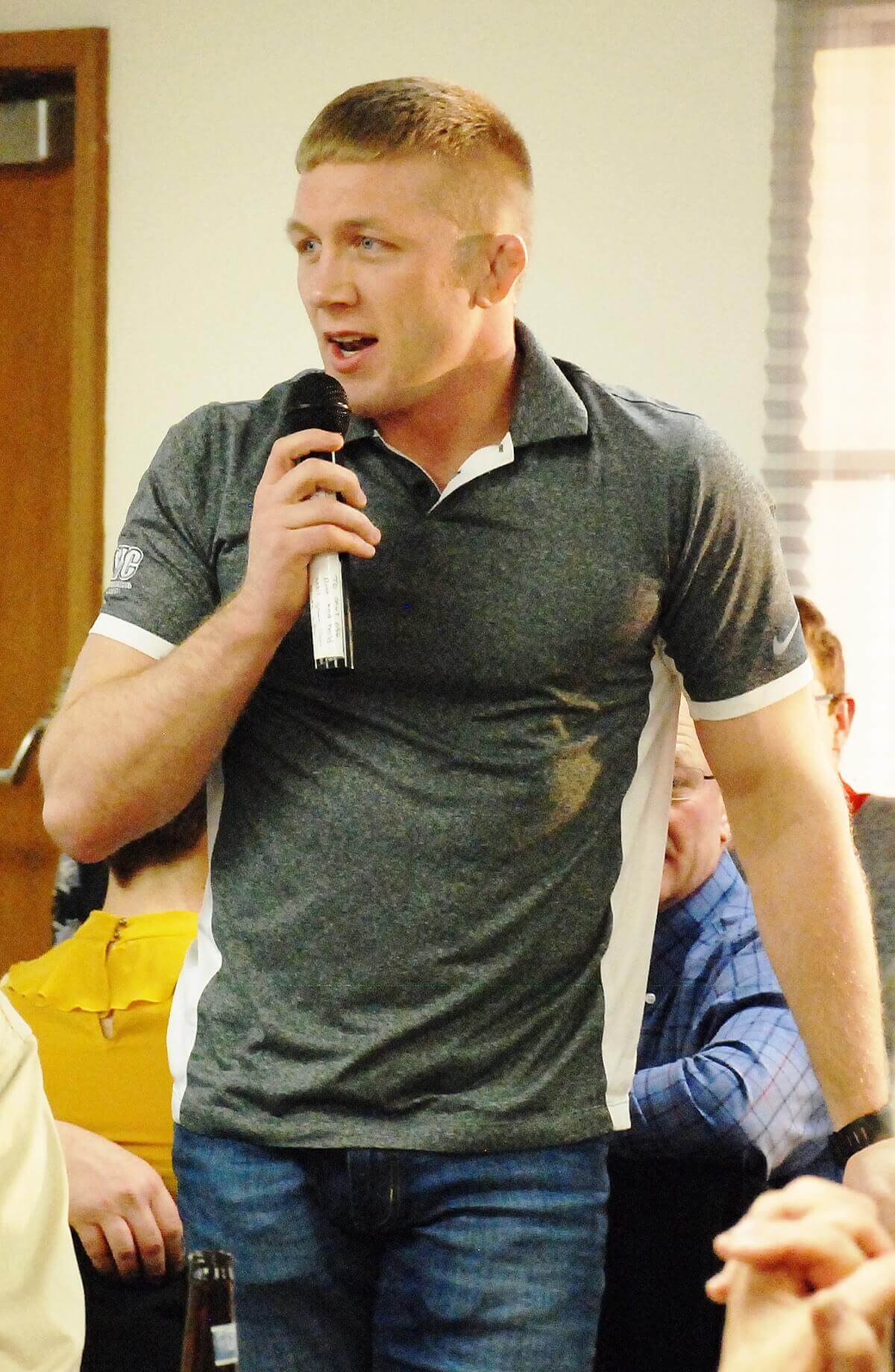 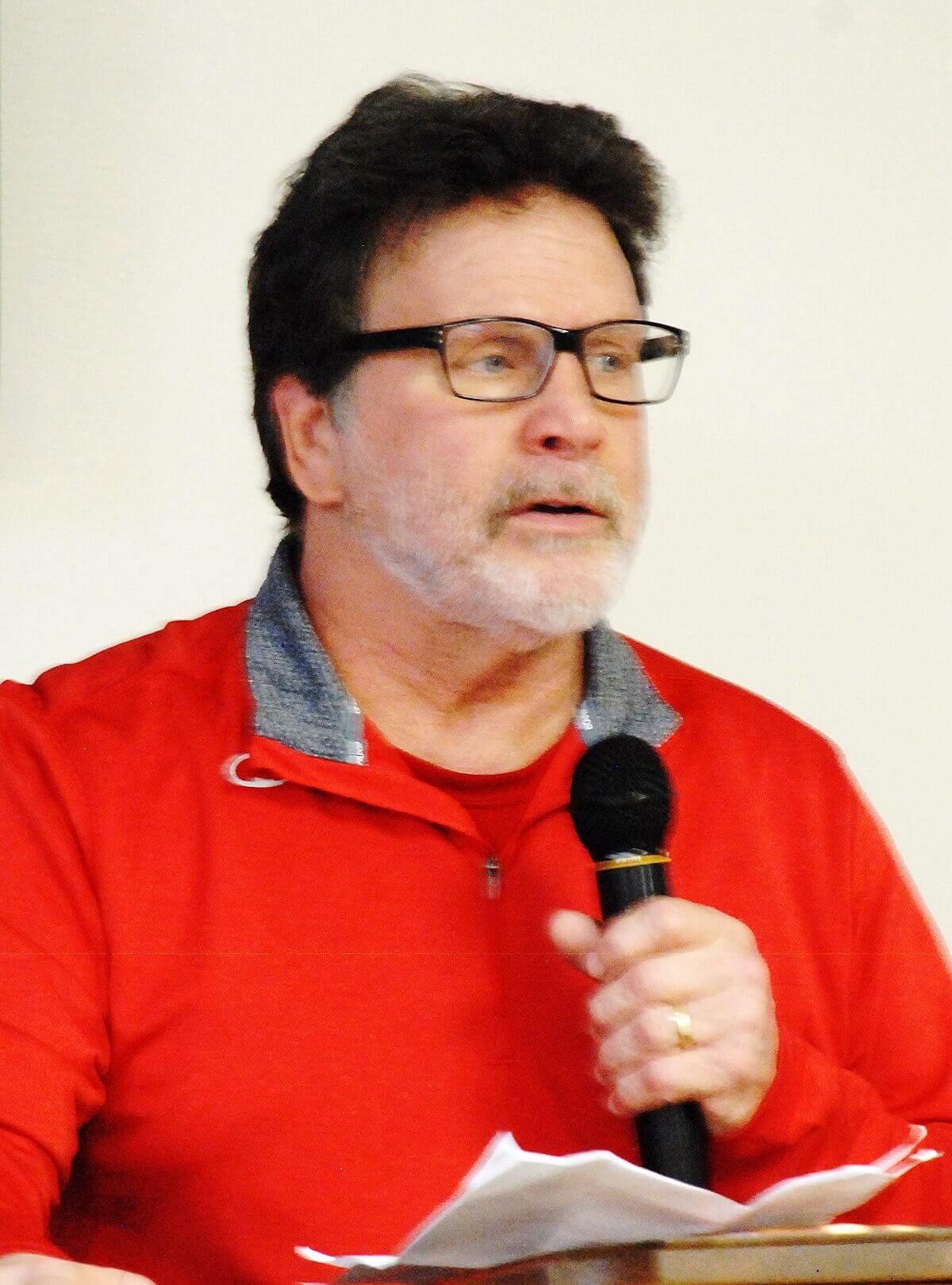 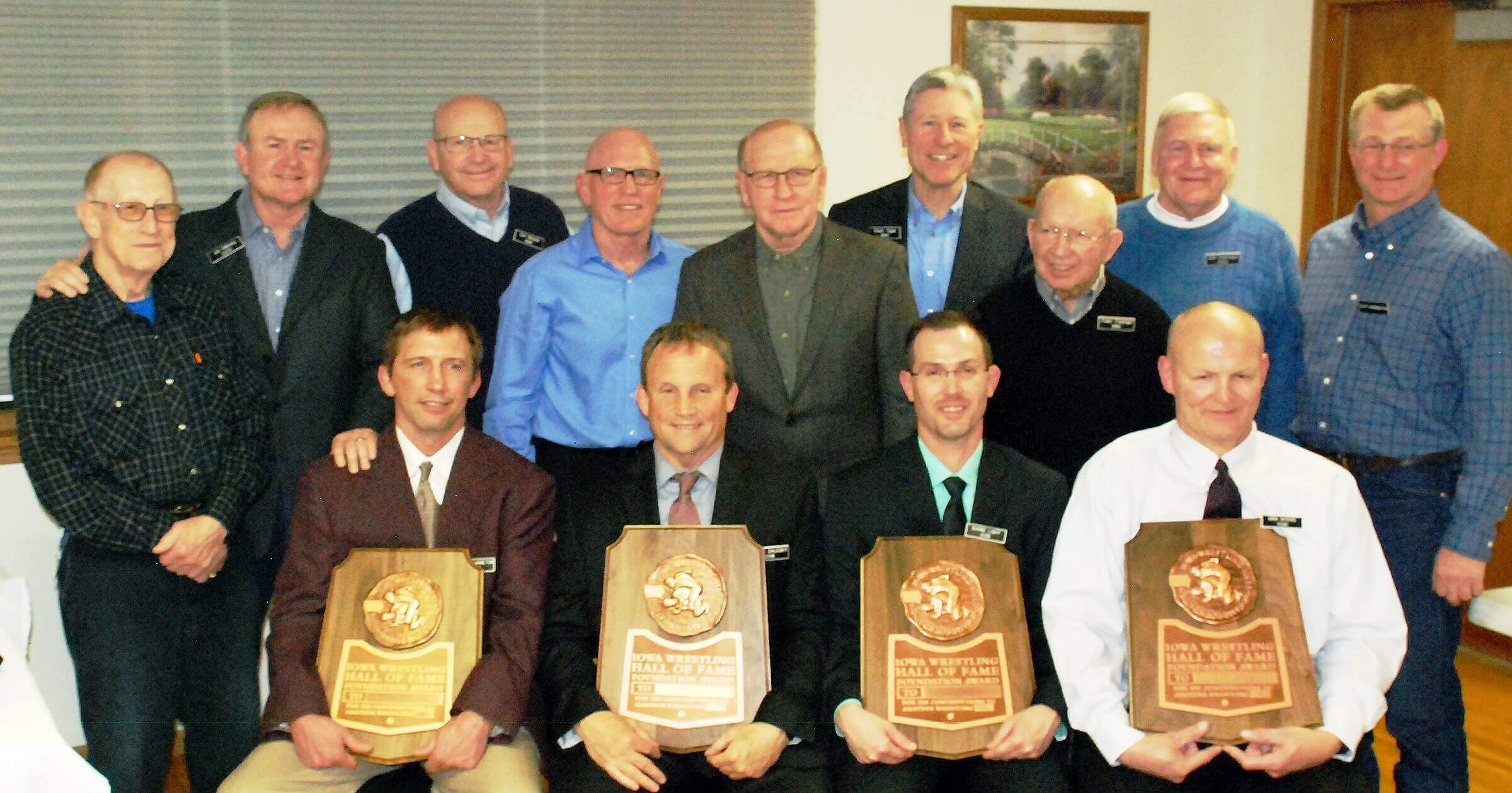