CRESCO – A capacity crowd gathered at the Cresco Country Club Monday to witness history as the Iowa Wrestling Hall of Fame inducted four worthy members into its prestigious club to bring the total number of members to 125. Joel Greenlee, Justin Greenlee, Mike Mann and Sandy Stevens were inducted into the Hall of Fame Monday during the 48th Annual Awards Banquet.
Master of Ceremonies Dennis Meirick gave a brief introduction about the four new members before he introduced Jason Passmore of the Cresco Chamber of Commerce, who welcomed the crowd and gave the invocation. Following the meal, Meirick recognized Crestwood Head Wrestling Coach Keith Slifka, who introduced some Cadet wrestlers in attendance including: Cale Jackson, Jared Knutson, Trae Pecinovsky, Trevor Trende. Riceville State Champion Chance Throndson was also recognized. The Hall of Fame Board of Directors at the banquet were also recognized including: Don Gooder, Jerome Hruska, Steve Slifka, Tom Fye, Merle Sovereign, Chuck Curtis and Jim Turvold. After Meirick pointed out several of the former inductees at the banquet, he noted that wrestling coaches from Iowa State University, the University of Northern Iowa, and the University of Iowa were in attendance. Kyven Gadson, who recently won an NCAA title for ISU and is currently a graduate assistant coach, gave a brief review of the Cyclones’ season. UNI Coach Doug Schwab noted how proud he was to see Stevens inducted into the Hall of Fame. Iowa Coach Mike Duroe said he was thankful for the passion Cresco has for wrestling.
Former UNI Coach Jim Miller introduced the 122nd inductee, Joel Greenlee, who was a State champion at Waverly and an All-American at UNI. Miller noted Joel was not good on his feet early in his career, but as time went on, he became a dominant wrestler. “If Joel had the first pick (during a match), he always deferred,” Miller said. “Even if he didn’t pin his opponent, his opponent would still get exhausted. Joel was one of the most dedicated athletes I’ve ever coached.” Joel began his speech by thanking the Iowa Wrestling Hall of Fame Board Members, and he noted it was special for him to go into the Hall with other UNI Panthers such as his brother Justin and Sandy Stevens. “I was honored, humbled and shocked when I learned I was being inducted into the Hall of Fame,” Joel said. “Nothing compares to the passion for wrestling in the state of Iowa. “I was fortunate to cross paths with a lot of people who have helped me, such as my family, friends and relatives. I thank my parents, who taught me to work hard for what I wanted and for teaching me and my brothers to win big. I also want to thank my wife, Roxanne; my son and my daughter for being a huge part of my life. “I also have to thank my brothers, Jerry and Justin. I had the rare opportunity to coach my brother, Justin. I’m more of a doer and Justin is more of a thinker. Justin made me a better coach,” Joel said. He added his years at UNI were the best years of his life. “When I was at UNI, I learned I wanted to coach, and I learned who I wanted to spend my life with – my wife, Roxanne,” Joel said. He said he also learned a lot from his three coaches at UNI, including Jim Miller. “I can’t say enough great things about Coach Miller,” Joel said. “One thing I learned from him was to have a passion for wrestling. He always taught me to scheme to beat the next guy (in competition). I also want to thank my teammates for teaching me what it is like to work hard.”
Miller then introduced Justin Greenlee as the 123rd inductee into the Hall of Fame. Justin was a State champion at Waverly and a three-time All-American at UNI. Justin opened his remarks by thanking the selection committee, and he said he was humbled to go into the Hall of Fame. “When I talk about what wrestling means to me, I think about Dan Gable’s quote, ‘Once you’ve wrestled, everything else is easy.’ That quote makes a lot of sense to me,” Justin said. “Wrestling made a big difference in my life. It helped me with my work ethic. “Was getting my PhD easy? No, but I didn’t have any doubt I could do it because of the people I have in my life who have helped me meet my goals. “Through wrestling, I learned that winning matches is not all about me. When you can help a young person through wrestling, that is satisfying. I’ve learned you can work magic with high school wrestlers. If you can get in someone’s corner, go find your way to support young people,” Justin said.

Kyle Klingman introduced the 124th member of the Hall of Fame, Mike Mann. Mike won a State title at Marshalltown in 1978 before competing at Iowa State, where he won a 1981 Midlands title and a 1983 Big 8 championship. Mike is currently coaching at Marshalltown. “Mike defined greatness during his impressive career,” Klingman said. “He had a compelling wrestling style and made wrestling fun to watch.” Mike thanked Klingman for introducing him and acknowledged many people had a positive impact on his life. “When I became a high school coach, I wanted to coach a superstar,” Mann said. “As a coach, I’ve learned how important it is for kids to compete and do their best. “When I visited the Iowa Wrestling Hall of Fame, I was amazed by reading the biographies of all the inductees. The impact a coach has on someone’s life is great. My junior high coach jump started my career, and my high school coach also had a big impact on me. “When I became a coach (in 2012), I have learned how inviting people are because you are invited into the wrestling world. I am so blessed and honored to be selected for the Iowa Wrestling Hall of Fame,” Mann said.

Kyle Klingman also introduced Sandy Stevens, the 125th member and first woman inducted into the Wrestling Hall. “Sandy Stevens is one of the most recognized voices in wrestling,” Klingman said. “She has announced every major wrestling event in the world. Through her words, she gave wrestling a voice.” “I have a lot of words to express how I felt about this honor and how much this means to me,” Stevens said. “I was born in Cedar Rapids and graduated from UNI. I announced my first meet in Cedar Rapids. “I took a test to become a referee, and I discovered I was the first woman in the United States to become a certified wrestling official. Because of that, doing play-by-play for wrestling felt natural to me.” Stevens noted she announced meets at Cedar Rapids Kennedy, the National Freestyle Meet at Waterloo, the Big Ten meet, the Division II meet at UNI and the Division I meet at Iowa State. “With wrestling, there have been a lot of men who have supported me, including coaches, wrestlers and referees,” Stevens said. “The support I’ve received from men has been indescribable. “Sometimes I am asked if I miss Iowa. I tell people that I miss Iowans. What I miss about Iowa is that Iowans are people of substance. Iowans understand core values, such as family and work ethic. Wrestling is a sport of substance.

“From experience, I know that wrestling saves lives. Everyone involved in wrestling can point to a time when wrestling made a difference in someone’s life. I am so grateful to the Iowa Wrestling Hall of Fame for selecting me to be inducted. Thanks for gifting me with this precious honor,” Stevens said. 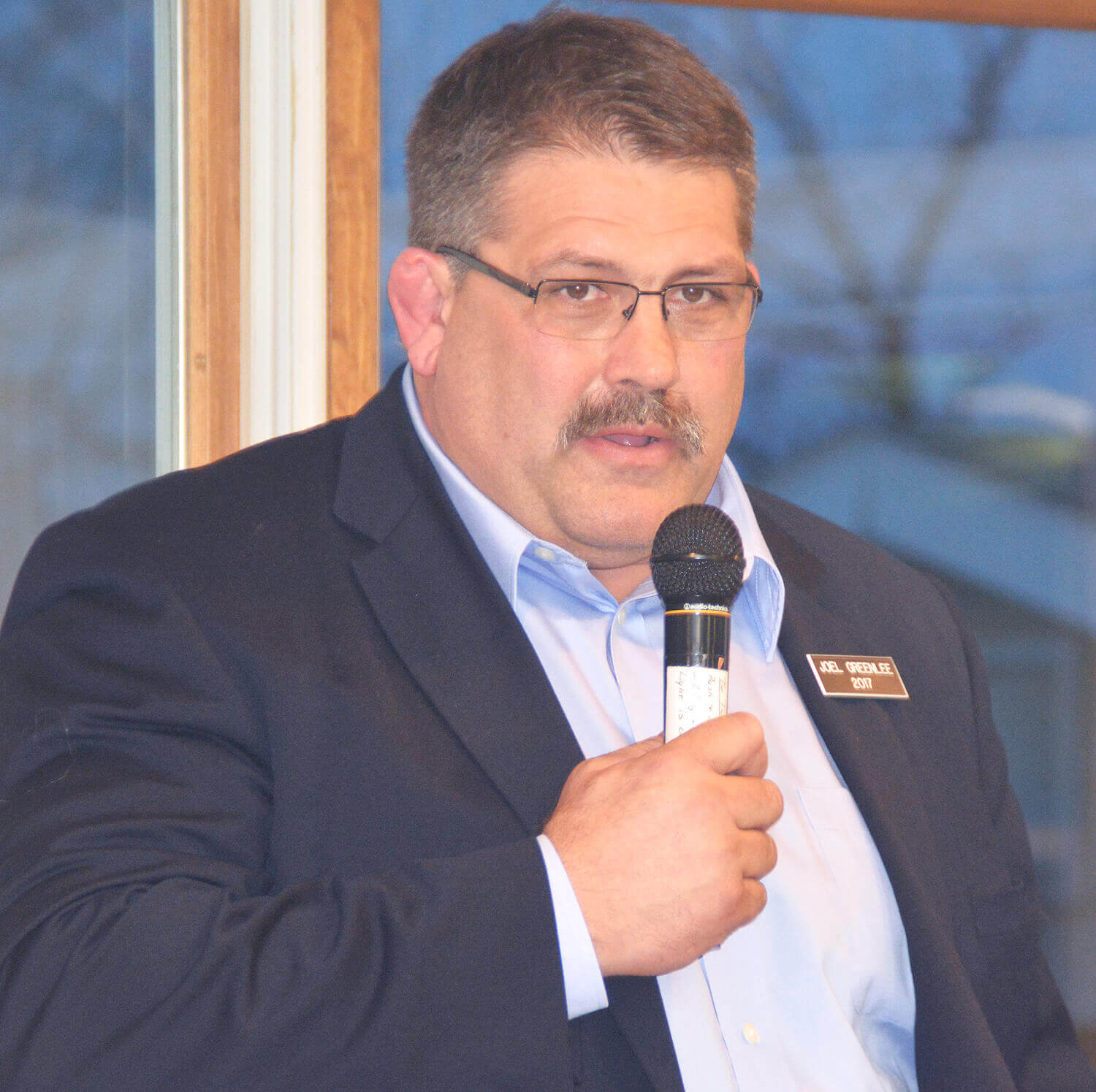 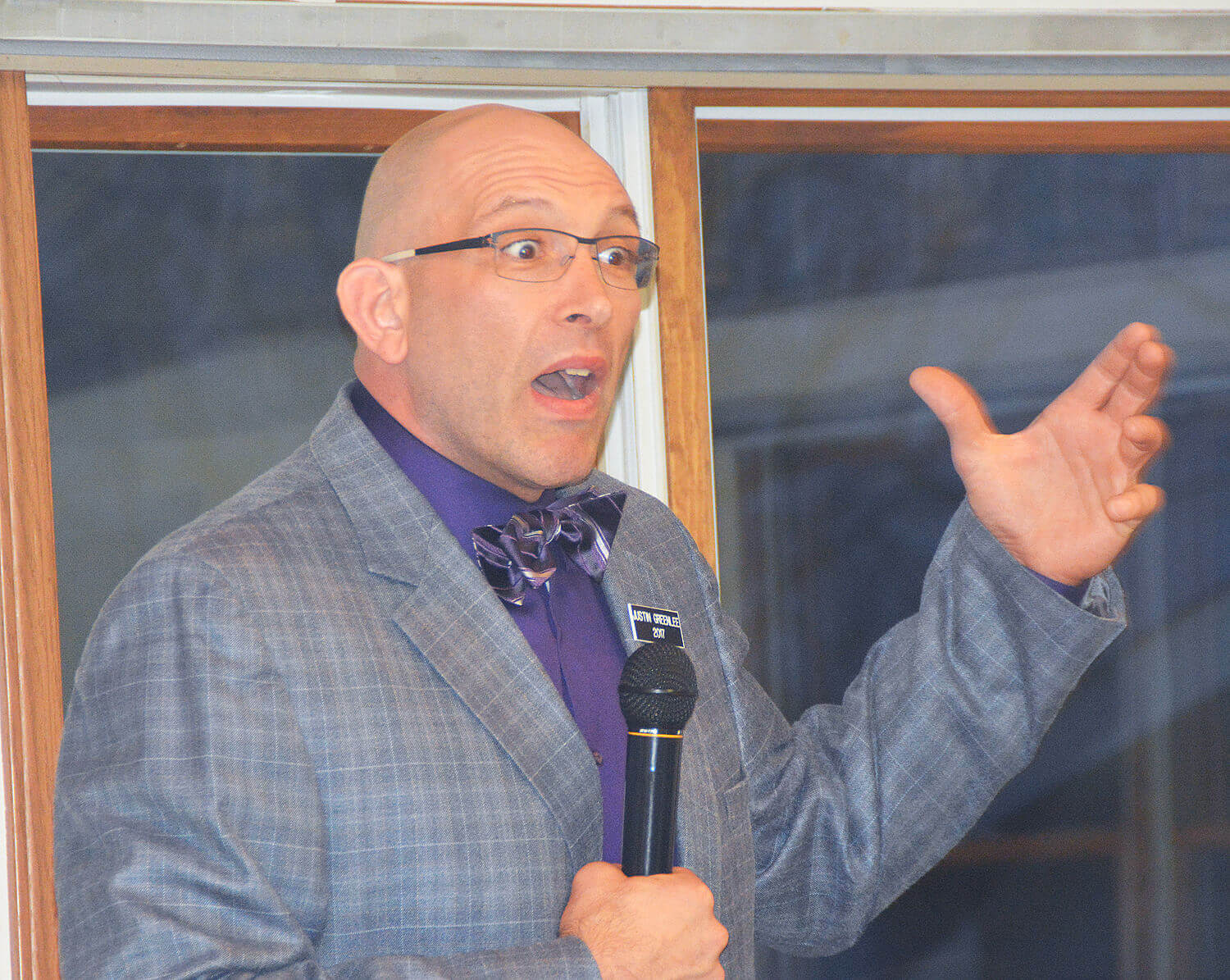 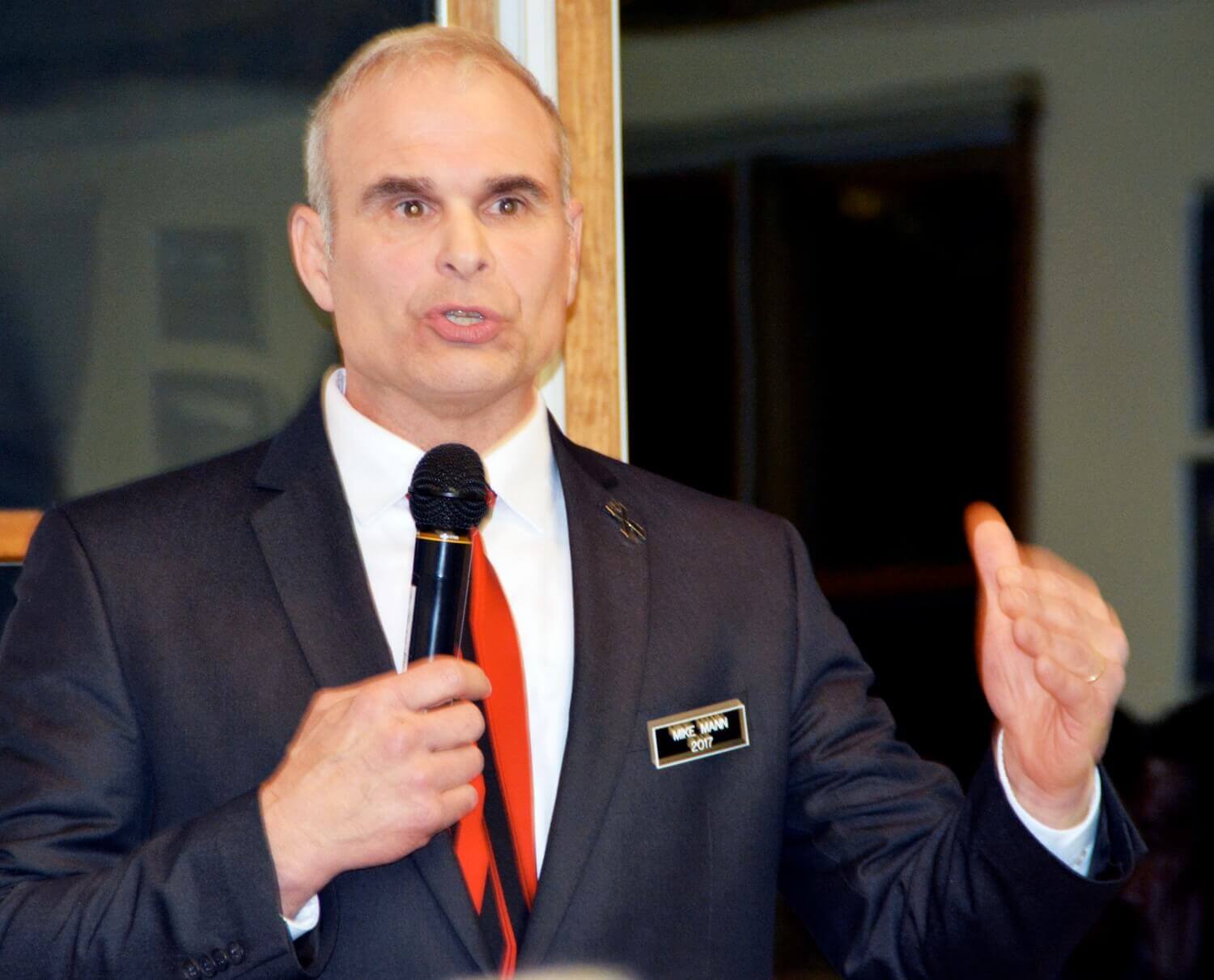 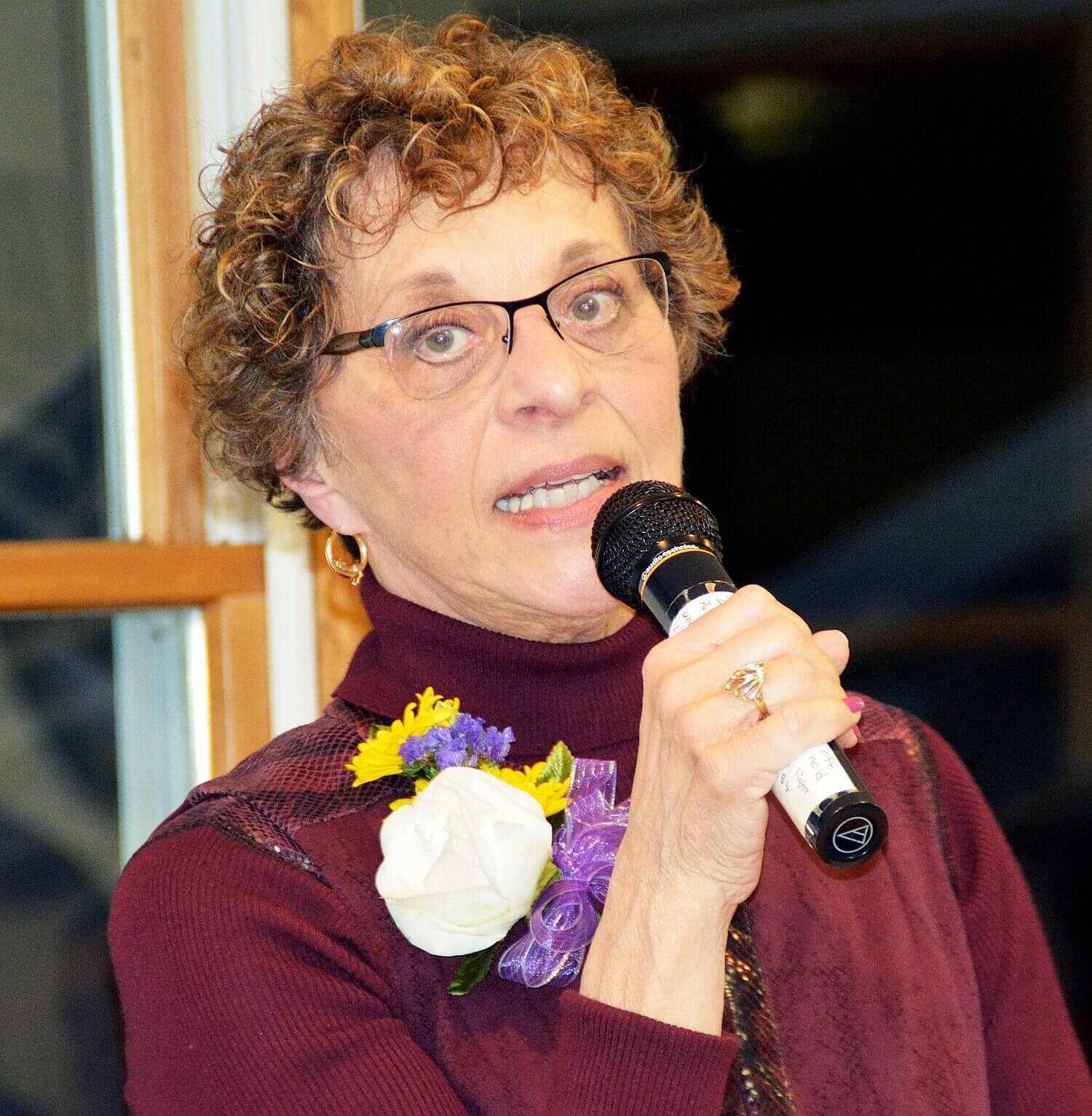 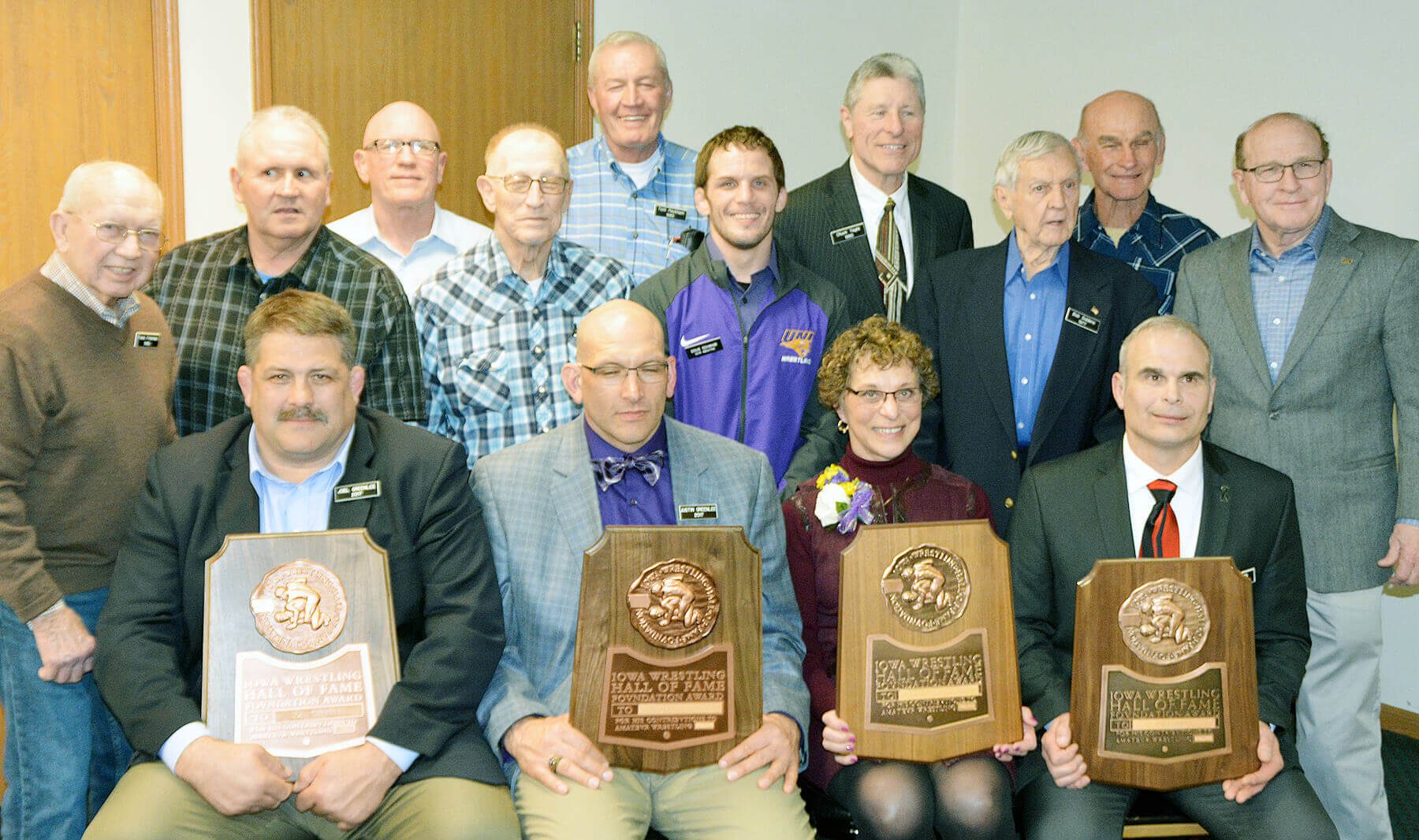 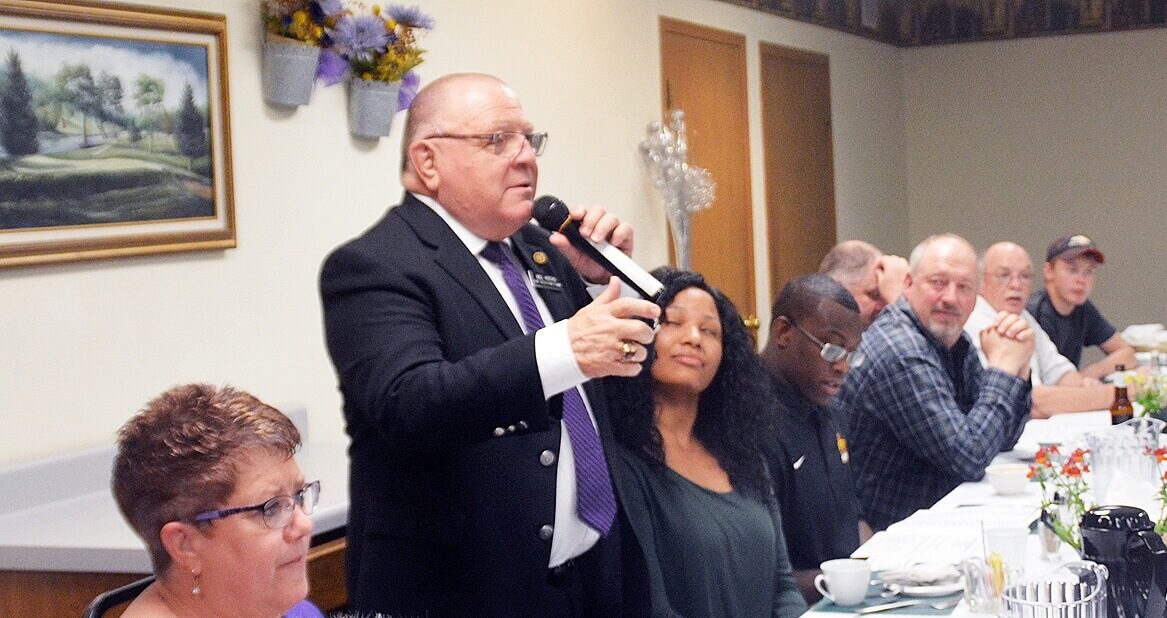 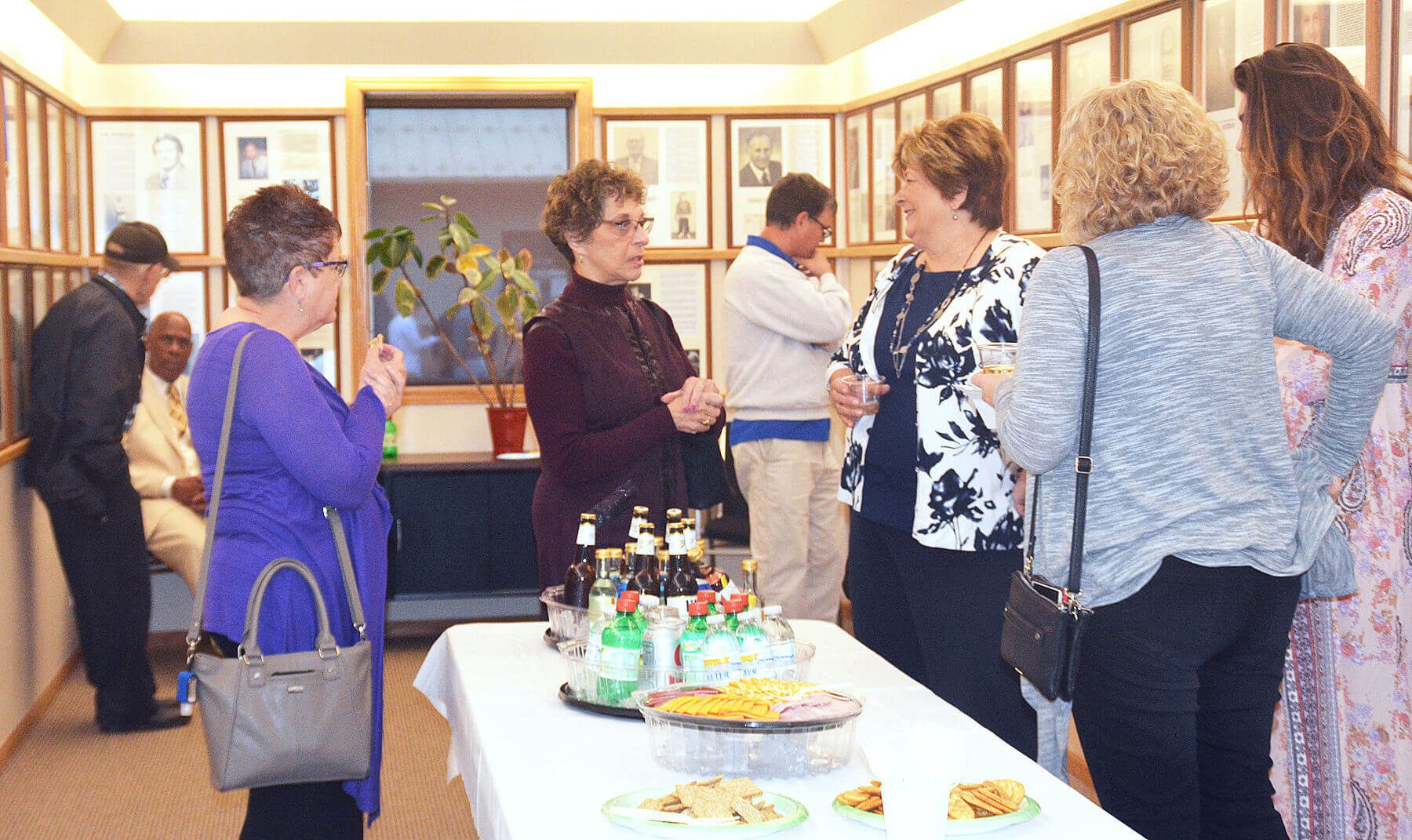 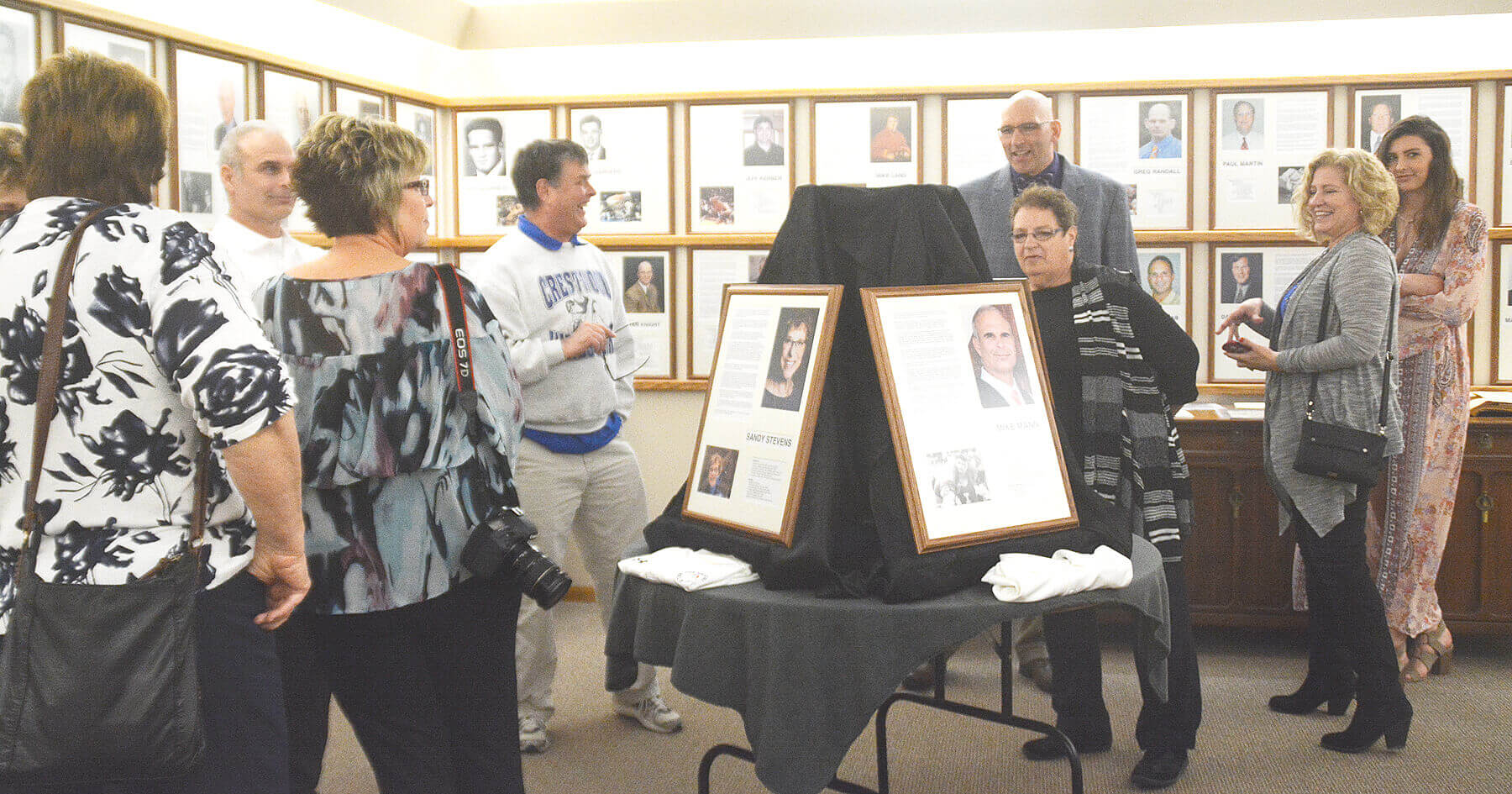