CRESCO – The Iowa Wrestling Hall of Fame in Cresco welcomed Rick Caldwell, Jim Duschen, Tim Johnson and Mark Reiland into its impressive club during the Hall’s 47th Annual Awards Banquet held Monday at the Cresco Country Club.  Master of Ceremonies and Board of Director member Dennis Meirick welcomed the capacity crowd to the banquet and gave a brief introduction of all four inductees. Following Meirick’s remarks, Jason Passmore of the Cresco Chamber of Commerce congratulated the new members and gave the invocation prior to the meal.  Following the meal, Meirick introduced the Board of Director, the Selection Committee and welcomed 1977 inductee and former Iowa wrestling coach Dan Gable, who commented about the Olympic trials held recently in Iowa City.  Gable encouraged everyone at the banquet to continue to promote wrestling,and he complimented people in Cresco for their devotion to the sport.  “If everyone was like Cresco, we’d be in great shape in wrestling,” Gable said. “We had some great (Olympic) trials,but we still need more than six weights per style at the Olympics.Don’t let up. We need to continue to get stronger.”

After Meirick recognized the former inductees in attendance, Bill Roths gave the introduction for Rick Caldwell, who enters the Hall as the 118thmember.  Caldwell was a two-time All-American at Buena Vista University before becoming a high school coach. He coached at  BGM-Brooklyn, Ames and Iowa Falls before coaching Waverly-Shell Rock. At W-SR, Caldwell won 14State team titles.  Roths noted Caldwell has put thousands of hours into coaching and noted he always preached, “to get better, you have to be better.”  Caldwell opened by thanking Roths, the Selection Committee, the Board of Directors, his family and many supporters from Waverly in attendance.  “I’m humbled by this award, and I’m proud to be a part of the Go-Hawk family,” Caldwell said. “The wrestling community is special in Iowa. I’m fortunate to be in a state with many wrestling legends.  “Even though the wrestling community is small, my path has crossed with all three of the other inductees tonight. When I started coaching at Waverly, Mark was the gold standard (at Iowa City West) and he motivated me. What I miss most about coaching is taking my team to battle his team,” Caldwell said.  He added many people influenced him as a coach and wrestler including: Al Baxter at BVU, former inductee Bob Darrah, Coach Dan Gable and Tom and Terry Brands.  “Before I came to Waverly (to coach), I’d move around every couple of years,” Caldwell said. “But Waverly was the perfect fit for me. We were organized, the coaches were committed to the program and we had tremendous parents at Waverly.  “During my second or third year at Waverly, I was driving home from the State Tournament with my family, and my wife said to me, ‘When are we going to leave here happy?’ I told her, ‘I won’t be happy until we win a title.’ She asked me what I have to do to win a title, and I told her I have to have more time (to devote to wrestling). My wife told me I could have all the time I needed,”Caldwell said.

Mike Chapman introduced the 119th Hall inductee: Jim Duschen. Chapman noted he has been friends with Duschen since they were both 12 years old.  Duschen competed at East Waterloo before going to Iowa State where he won two Big 8 championships, a Midlands championship and All-American honors.  “Jim had an incredibly big heart and an iron will,” Chapman said. “His heart was as big as the wrestling room. He built the finest wrestling program in Nevada.”  Duschen thanked Chapman for all his support over the years, praised the Selection Committee and gave thanks to many family members.  “I’ve been fortunate to be surrounded by Hall of Famers,outstanding coaches and teammates and I’m thankful for the pubilicity the Waterloo Courier gave to wrestling,” Duschen said.  His introduction to wrestling came in seventh grade when he watched his uncle win a championship.  “My high school wrestling career was not stellar, but I felt like I could go on in wrestling,” Duschen said. “Bob Buzzard recruited me to go to Iowa State to wrestle for Harold Nichols. I worked out at Iowa State with Tom Peckham, which was a lesson in self-defense.”  After college, he coached high school teams for 30 years in Iowa and Nevada.  “I realized wrestling goes far beyond the wins and losses,”Duschen said. “I’ve learned the desire to win needs to exceed the fear of losing. The people I’ve met in wrestling are the best people.”

Jim Miller welcomed Tim Johnson of Morning Sun as the 120th inductee.Johnson has covered wrestling for Iowa Public TV, ESPN, the Big 10Network, and he was the Director of Wrestling at the 1984 Summer Olympics.He also coached at Mount Vernon for five years.  Johnson thanked Jim Miller and Cresco for hosting the Hall of Fame.  “In southeast Iowa, our program is built on the shoulders of Cresco,” Johnson said. “I am humbled. All I have is the gift from God and the people who support Him.”  Johnson gave kudos to the other Hall members and noted, “I can’t compare to the wrestling accomplishments of the other inductees, but I was born in Iowa. I appreciate being from Iowa.”  Johnson added his life was influenced by Morning Sun Coach Bob Darrah.  “Bob convinced me I could do anything,” Johnson said.  “Even after I broke my leg when I was 12, he told me that as long as I could wrestle, I’d be OK.”  He noted the second best thing he did in 1984 was directing the Summer Olympics. The best thing he did that year was marrying his wife, Lisa.  Johnson said Dan Gable challenged him as a wrestling broadcaster.  “Gable told me, ‘Everything I’ve done, I wanted to be great. Tim, you are good, but you can be better.’ I strive to be better every day.”

Marv Reiland welcomed his son, Mark Reiland, as the 121st inductee into the Hall. Marv praised Mark for his accomplishments, which included earning a State medal for four years at Eagle Grove from 1984 to 1987 and posting a strong career at the University of Iowa where he won a National Champion-ship in 1991. After college, he took over as coach at Iowa City West, where he is currently coaching.  Mark Reiland thanked the Selection Committee for choosing him, and gave kudos to Bill Roths for calling him to notify him of his selection to the Hall.  “I’ve been blessed with a good support system,” Reiland said. “It’s great to have a lot of family here and several former wrestlers here to support me. I also want to thank the Waverly crowd for egging me on during my career.  “Eagle Grove was a great place to grow up. I’ve gotten to know a lot of great wrestlers by growing up in Eagle Grove. Getting the chance to go to the University of Iowa was unbelievable. Our coaching staff was great and my teammates were great at Iowa. I was lucky to have what I had in wrestling,” Reiland said.

Dennis Meirick concluded the banquet by thanking all the local businesses who support the Iowa Wrestling Hall of Fame and the Cresco Country Club for hosting the banquet. 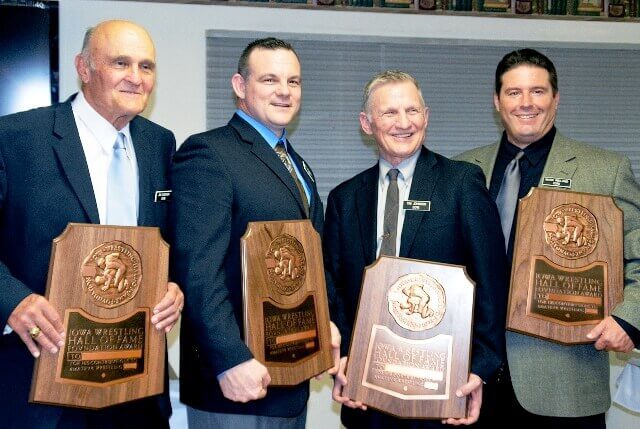 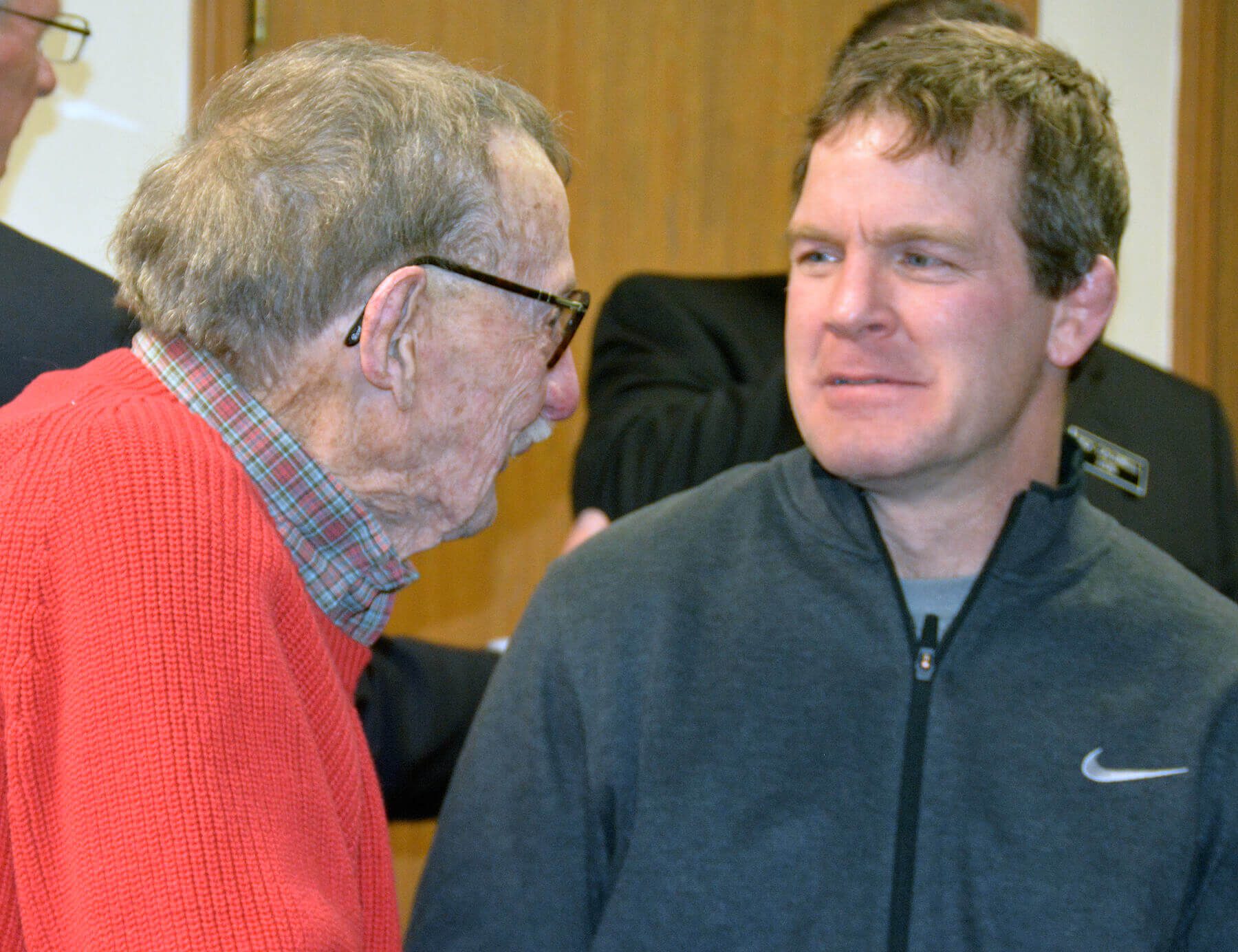 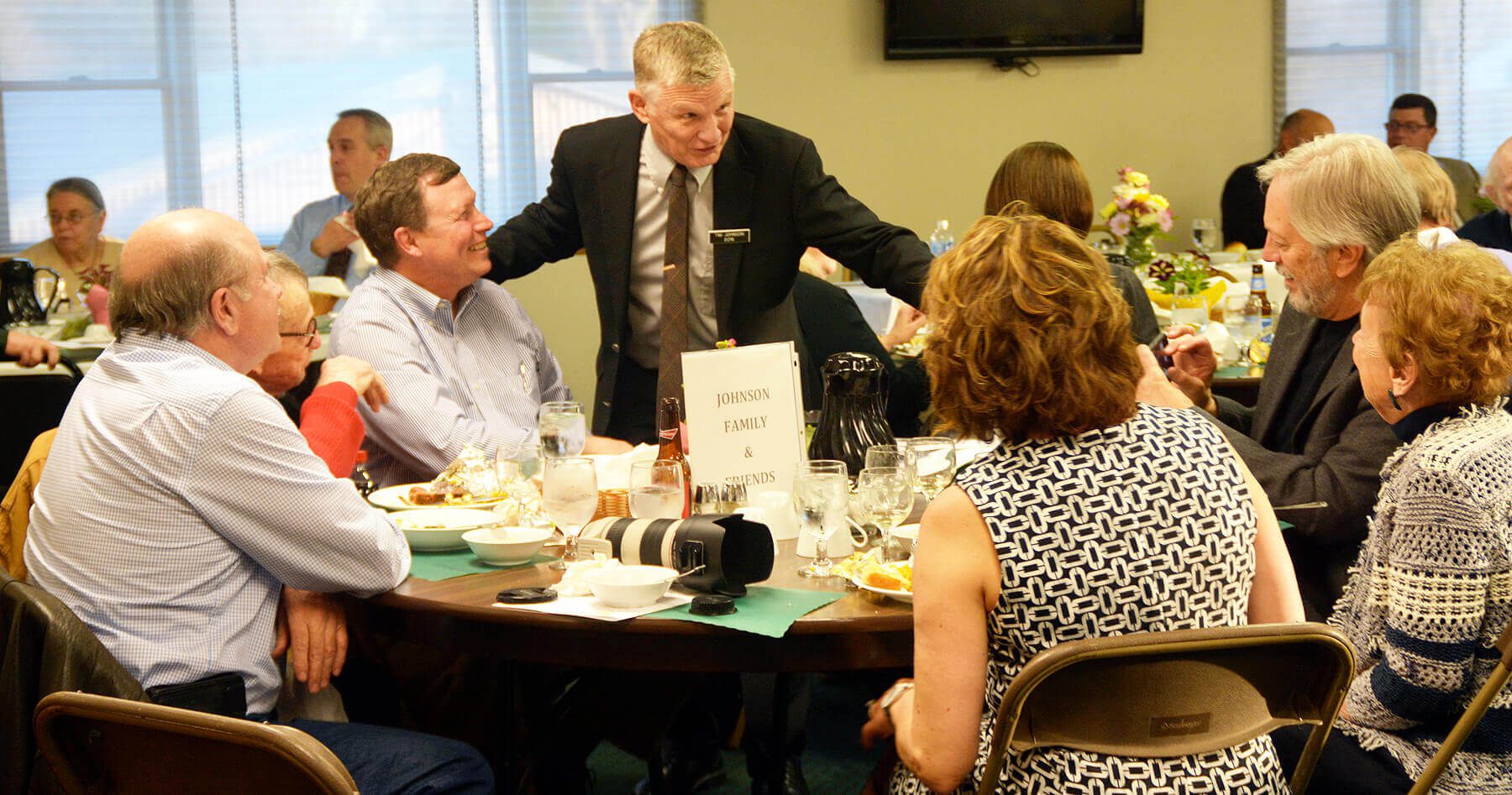 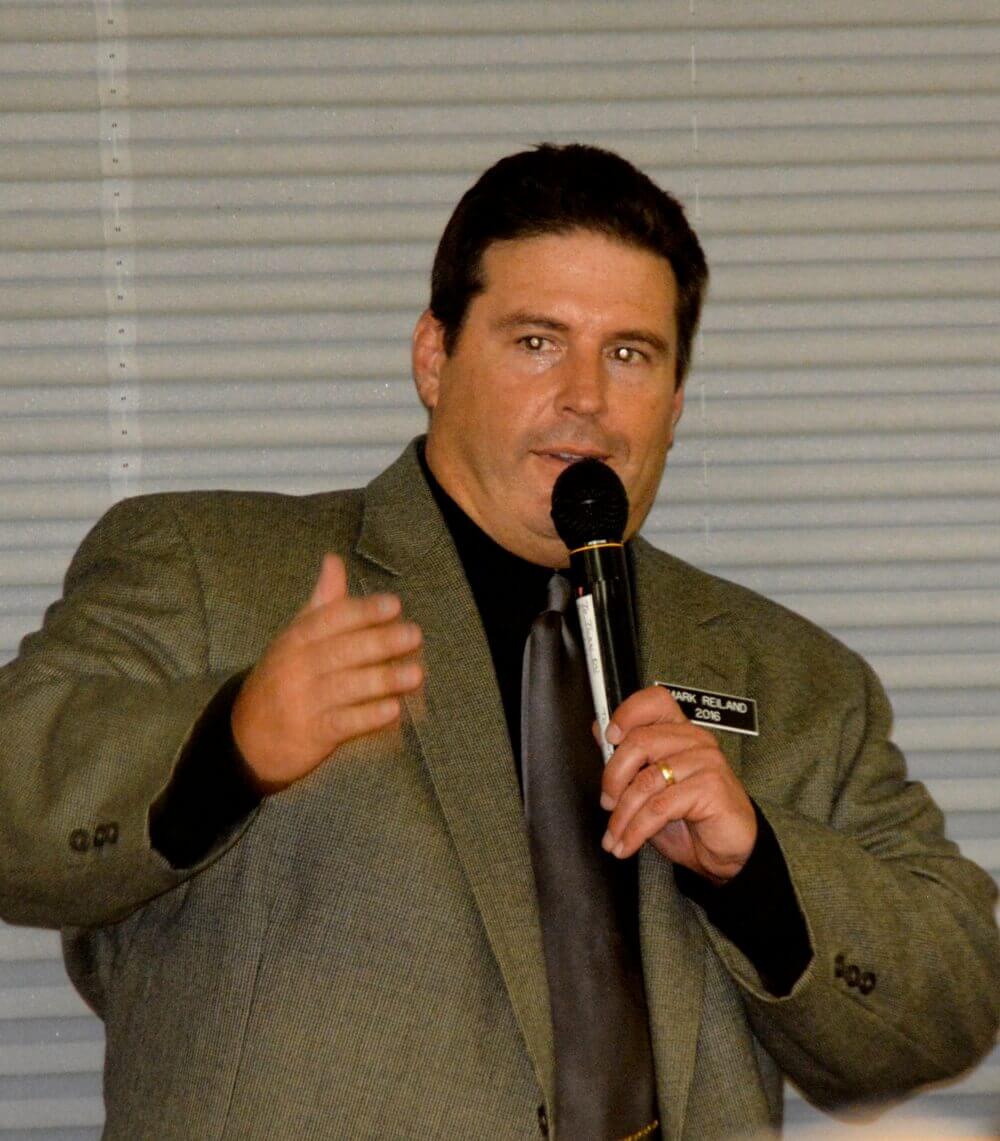 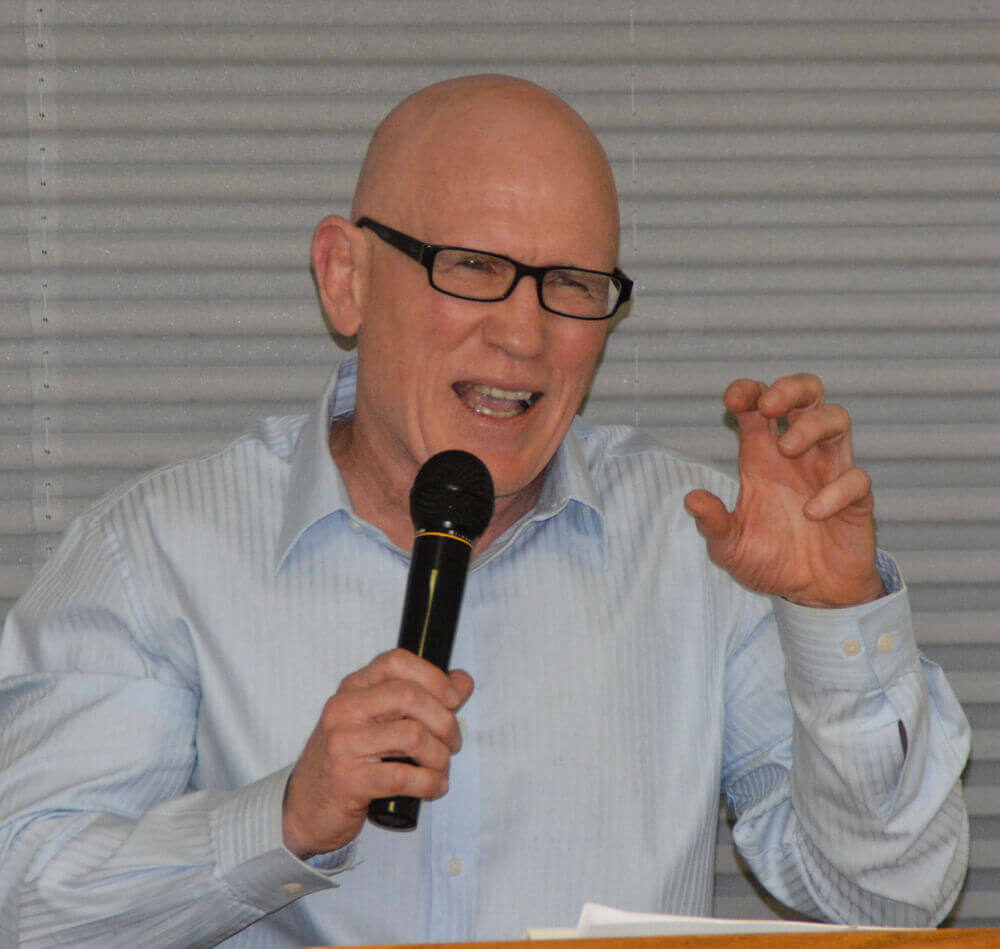 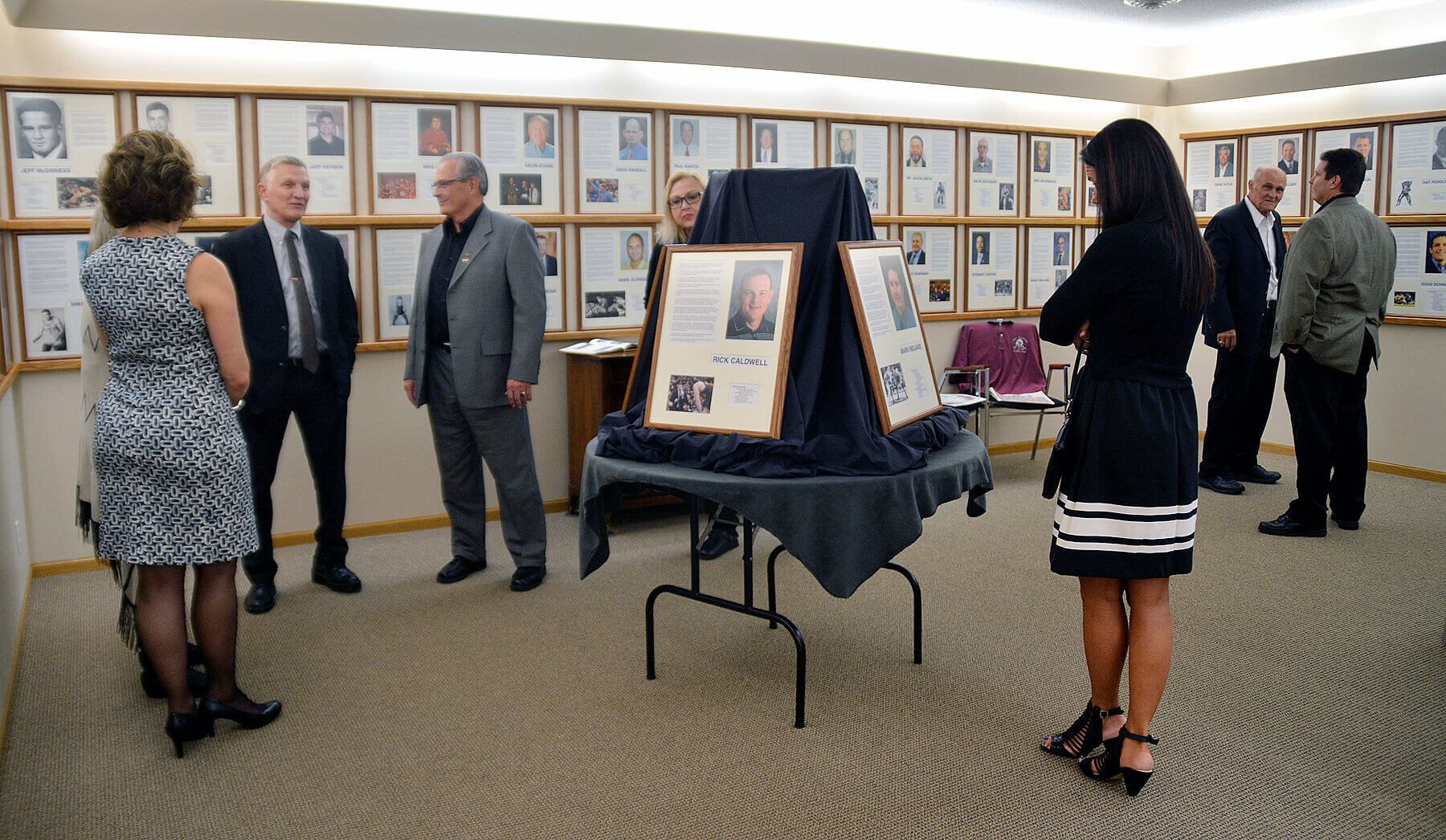 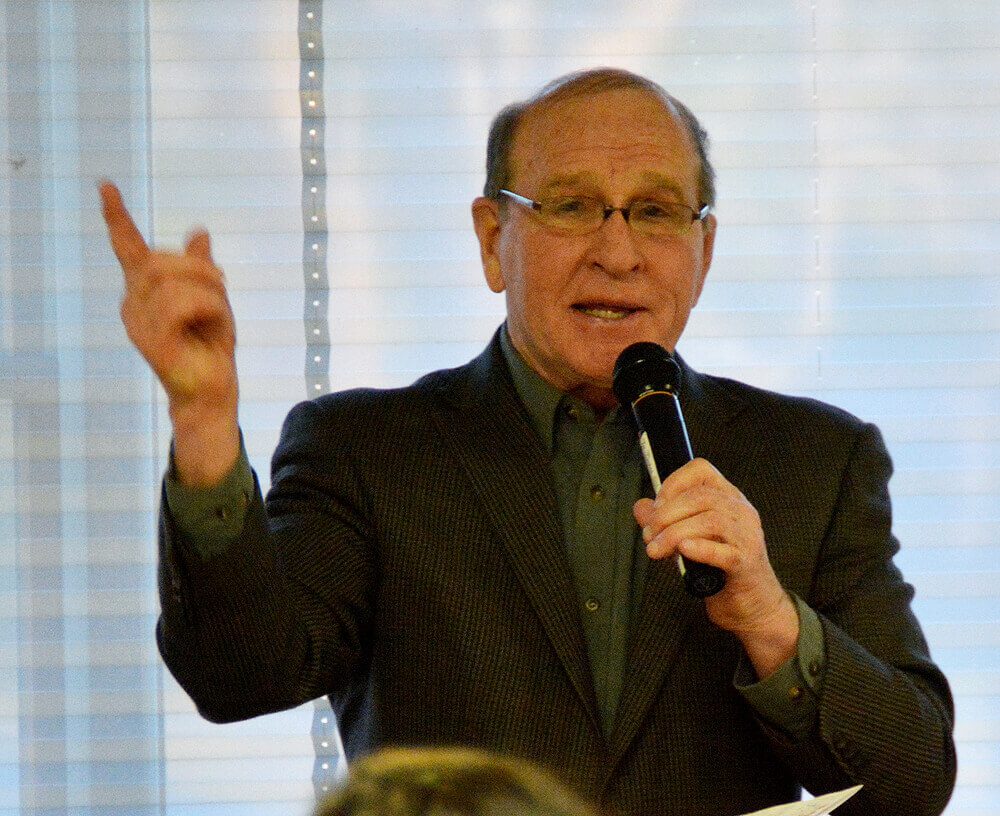