CRESCO – A capacity crowd of more than 200 people gathered at the Cresco Country Club Monday night to witness the induction of five new members in the Iowa Wrestling Hall of Fame during the 45th Annual Awards Banquet.

Master of Ceremonies Dennis Meirick opened the banquet thanking everyone in attendance. Jason Passmore of the Cresco Area Chamber of Commerce welcomed the crowd and gave the invocation before the meal was served.

As the dinner was being served, Tom Beck, introduced the members of the 1964 Crestwood Wrestling Team, which was the last Crestwood team to win a state championship. Beck was also a member of the 1964 squad.

“What a family the team of 1964 was. I tried to do my part for wrestling by being the voice of northern Iowa (while broadcasting Crestwood wrestling on the radio for 10 years),” Beck said.

The board of directors next honored the three founding members of the hall of fame with a ‘Founder’s Award.’ The three members include: Don Gooder, Nehl McKone and Bob Howard. Howard was the first board representative on the selection committe. McKone followed him, and then Gooder followed McKone. Howard died in 1976, and McKone died in 2009. Gooder still serves on the committee.

“The board members are very unselfish,” Gooder said. “The selection committe always does what is best for wrestling. It is a solid group.

“Looking at the future of the hall of fame, it’s never been better. We have proved we are self-sustaining. We’ll never run out of good wrestlers (in Iowa),” Gooder said.

Meirick presented Gooder with an award and noted, “If it wasn’t for these three guys (Gooder, McKone and Howard), we wouldn’t be here.”

Dan Gable introduced the 109th hall of fame inductee, Kevin Dresser of Humboldt, who wrestled at the University of Iowa under Coach Gable and won an NCAA championship in 1986. Dan noted Kevin invented the ‘Dresser Dump’ wrestling move, and he was proud to coach Dresser.

Dresser, who is currently head coach at Virginia Tech, said he hasn’t been in Iowa since 1988, but added, “it’s great to be back in Iowa.”

Prior to taking over at Virginia Tech in 2006, Dresser coached high school wrestling in Virginia for 18 years. “I felt I have reached most of my goals (at VT), but I want to continue to reach more goals,” Dresser said.

Dresser recalled he visited Cresco in 1988 as a member of the Hawkeye Club.

“Dan Gable wanted me to pick up Royce Alger and bring him to Cresco. Royce brings a lot of excitement with him. I want to thank Coach Gable for having me look after Royce,” Dresser said.

As a kid growing up in Iowa, Dresser said he would watch the Iowa vs. Iowa State wrestling meets on TV. “Watching those meets motivated me a lot,” he said.

Dresser noted he was excited when he received a recruiting call from Gable.

“I got a chance to live the dream (wrestling at Iowa),” Dresser said. “In 1981, Dan Gable came to my house, slept in my bed and signed me (to wrestle) before breakfast the next day. To be introduced by him is really special.”

Dresser thanked his family, especially his parents, for their support.

“My mom and dad showed up at my meets, clapped and cheered for me. They were the greatest cheerleaders in the world,” Dresser said. He also thanked his wife and three children for their support.

“Tom put a lot of time into the program at Don Bosco. Tom is a tremendous role model to the kids. He is a great representative of Don Bosco and Iowa in general,” Mashek said.

Kettman expressed his thanks to the selection committee for nominating him, and he thanked Dan Mashek.

“I want to thank the town of Gilbertville for the opportunity to coach (Don Bosco),” Kettman said. “The kids in Gilbertville have a strong work ethic, which is second to none.”

Kettman thanked the parents, the fans who attended the meets and several of his assistant coaches over the years.

He also expressed his gratitude to his family, including his children, his brother, sister, his in-laws, his niece and his wife, Ann. “She’s put up with me for 30 years, and she is unbelieveable,” Kettman said.

Schwab expressed his thanks to the selcection committee and his family.

“My parents always supported me and were always 100 percent behind me,” Schwab said. “My mom is the rock of our family.”

Schwab said his two brothers and his sister helped guide him throughout his wrestling career.

“During my sophomore year at Iowa, I called my brother, Mike, because I needed a workout partner. I kicked the hell out of him, and it felt great,” Schwab said.

He said his focus now is building a strong program at UNI. “Now I am purple and gold, and I don’t like black and gold. But I need to thank Coach Gable and Tom Brands,” Schwab said.

Morrison was an Olympic wrestling champion in 1928. He was the first Iowan to earn gold in the Olympics, and the first American to win Olympic gold in wrestling since 1896.

Chapman noted Pendleton was born in Iowa in 1895 before his family moved a few years later.

Pendleton attended Columbia and never lost a match in college. He also won three AAU titles and a silver medal at the 1920 Olympics.

After graduation, he was a pro wrestler for two years and he made 85 movies.

“Nat was truly one of the greatest wrestlers in American history,” Chapman said.

He concluded his remarks with a tribute to Dr. Norman Borlaug. Chapman noted Borlaug once said, “Anything I have accomplished in science, I owe to wrestling.”

Dennis Meirick closed the banquet by congratulating all the inductees, and he thanked all the businesses who support the Iowa Wrestling Hall of Fame.

Doug Schwab, Tom Kettman and Kevin Dresser display the plaques they received after being inducted in the Iowa Wrestling Hall of Fame Monday. Allie Morrison and Nat Pendleton were inducted posthumously at the banquet. Three founding members were also honored. 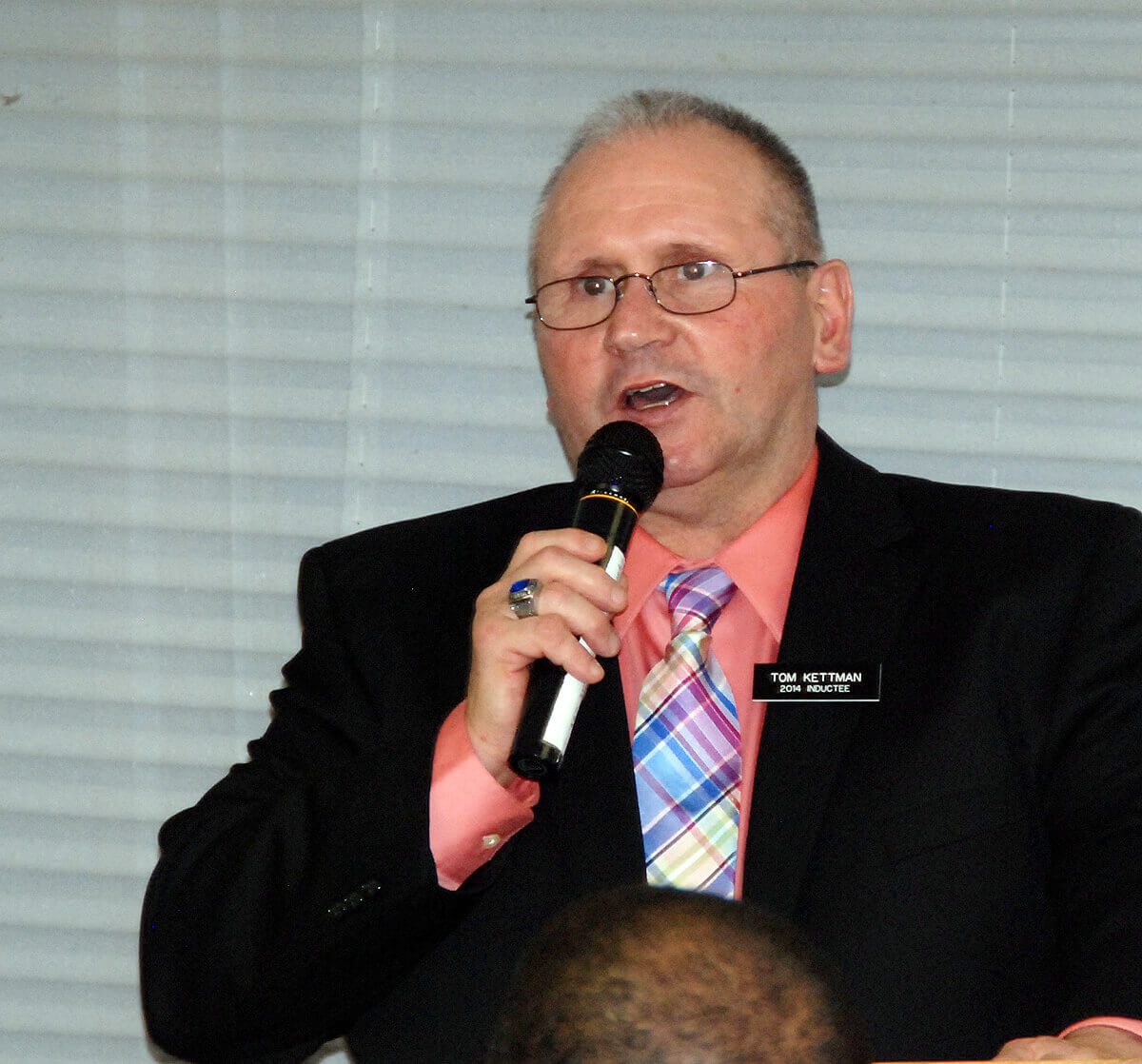 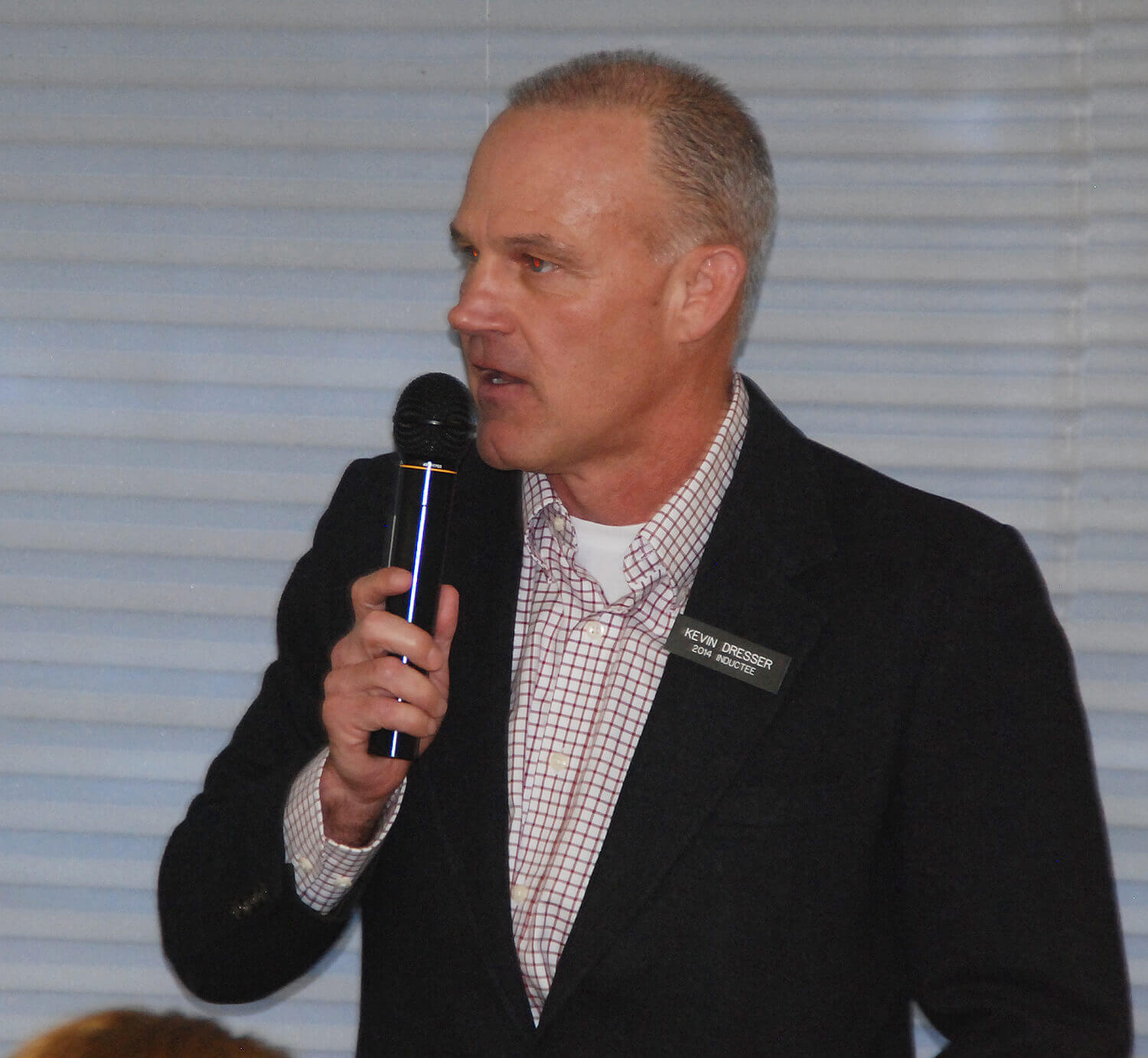 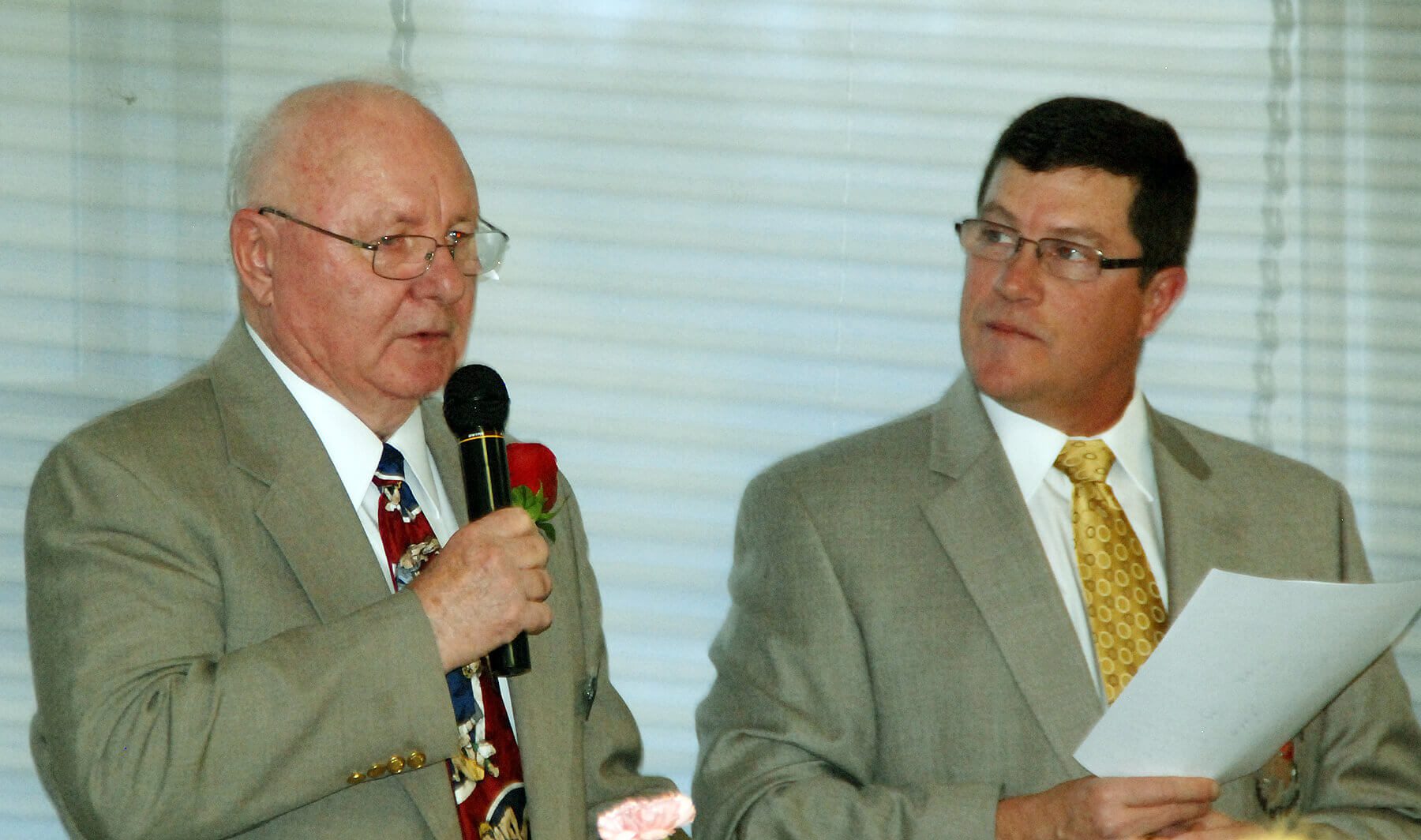 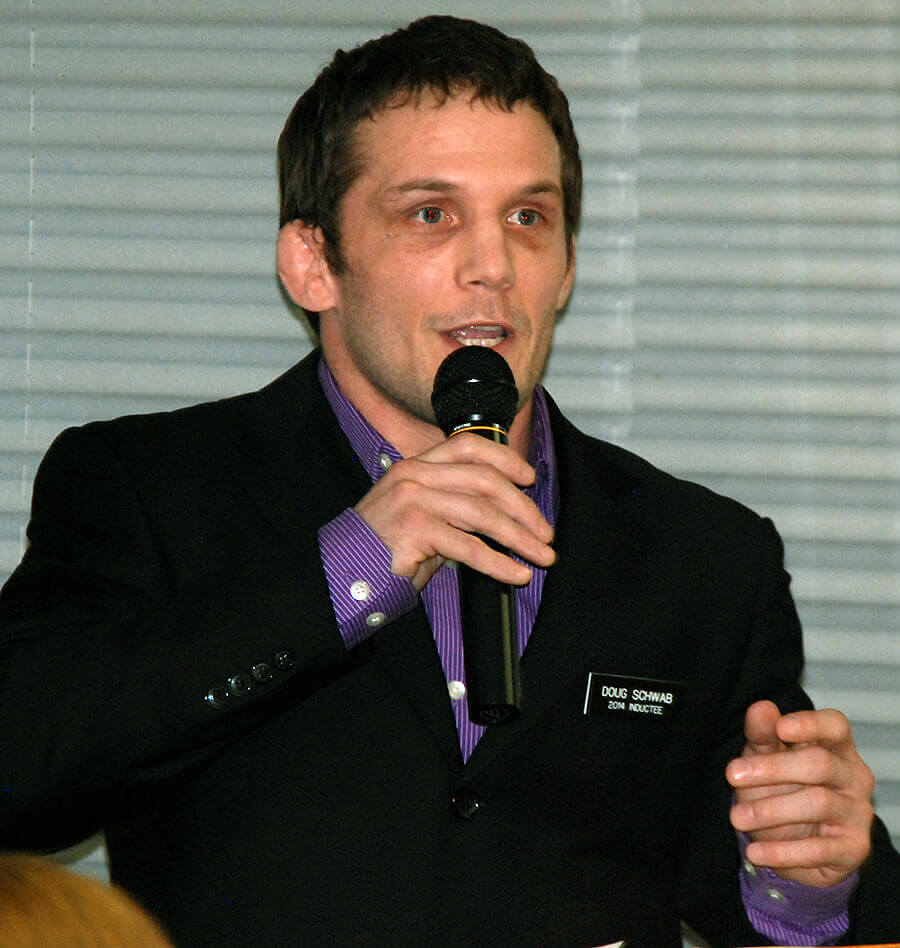 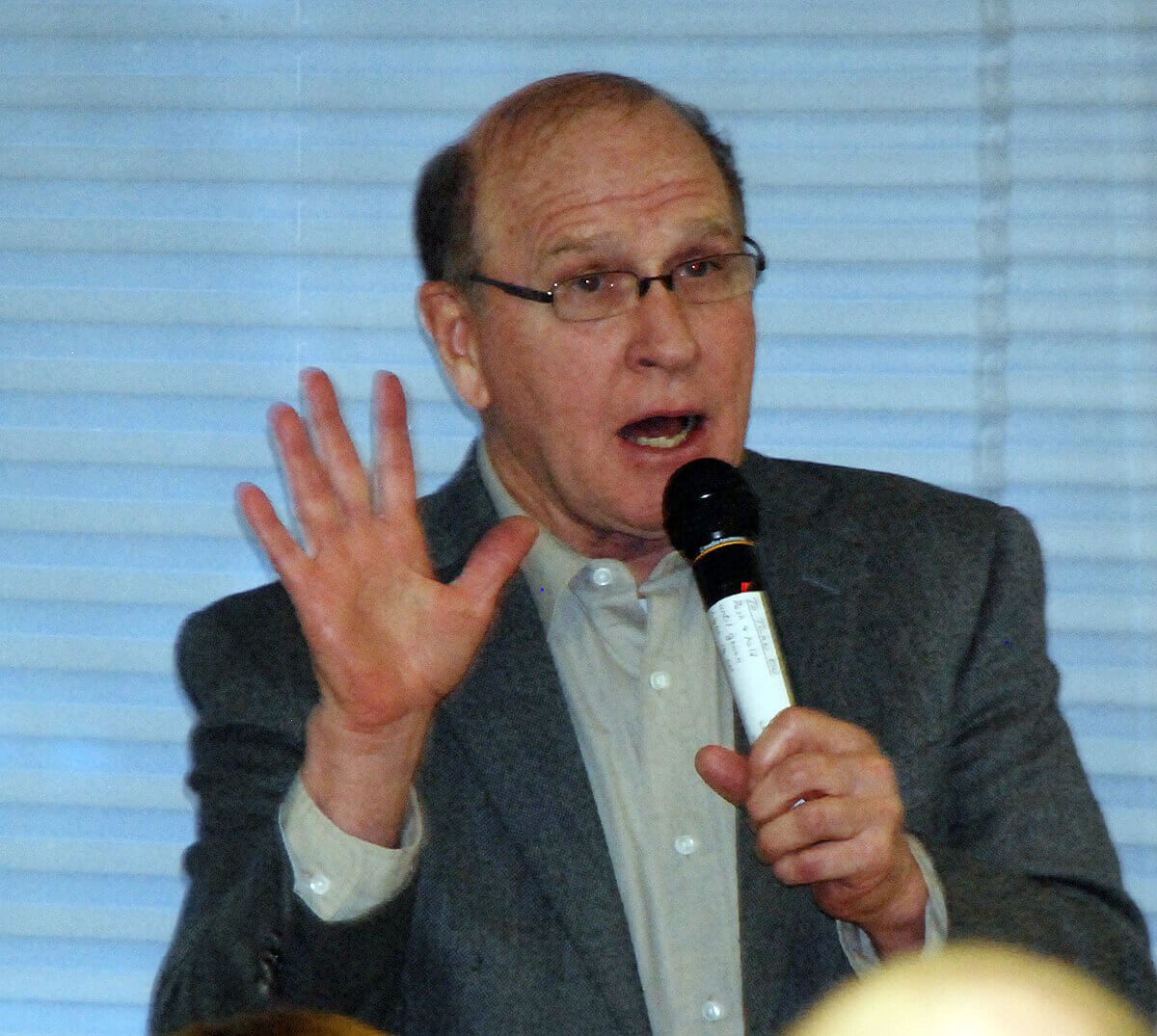