CRESCO – A capacity crowd gathered at the Cresco Country Club Monday night to witness the induction of four new members into the Iowa Wrestling Hall of Fame during the 43rd Annual Awards Banquet.

The 2012 inductees, which raised the total number of members to 104, included: Bob Buzzard, Gene Doyle, Marv Reiland and Mark Sindlinger.

Dennis Meirick, Master of Ceremonies and a member of the Board of Directors introduced Jason Passmore of the Cresco Chamber of Commerce,who welcomed everyone to the banquet. After Meirick asked everyone to remember former Crestwood wrestler Lee Johnson, who died recently, Pastor Tim Sir gave the invocation before the meal.

Following recognition of the selection committee, Dan Gable introduced the first inductee of the banquet: Bob Buzzard. Gable said Buzzard taught him a lot of wrestling skills and helped him train when he was in high school at East Waterloo. Buzzard was a two-time All-American at Iowa State University.

“It is my honor to introduce Bob. He is what made me strong,” Gable said.

Buzzard thanked Gable for the introduction, thanked the board members and extended his congratulations to the new and past inductees in the hall of fame.

“I praise Cresco for being a wrestling town,” Buzzard said.“I had some tremendous coaches when I was growing up in Iowa, including Dave Natvig, Harold Nichols and Les Anderson. They were men who knew how to trainmen.”

Buzzard expressed his appreciation to his sparring partners in high school and his wife, Pat, for standing behind him.

When Buzzard was in fifth grade, he noted his dad talked the junior high coach into allowing him to work out with the older wrestling students. Although Bob was not excited about wrestling when he was a fifth grader, his dad encouraged him to stick with it, and Bob said he was glad he did.

After losing in the finals of the State Tournament in 1959,Bob said his dad would dream up ways to improve his grappling skills.

“One of my dad’s ideas was to find workout partners and wrestle in the yard. During the summer of 1959, my dad said I needed to dig out ponds and carry full cans of gas all day to make me stronger. He knew how to make be a better wrestler,” Buzzard said.

The next inductee, Gene Doyle, was introduced by Kyle Klingman. Doyle served as head coach at Cedar Falls from 1985 to 2000. His teams won the traditional state title three times and the dual title once. He coached 43 state place finishers and 10 state champions.

Doyle noted he started his coaching career at Dubuque Senior before coming to Cedar Falls to coach.

“I had a lot of coaches who loved wrestling, and I love being around wrestlers and coaches. I’m honored to be in the Iowa Wrestling Hall of Fame,” Doyle said.

The third inductee of the banquet, Marv Reiland, was introduced by Bill Roths. Reiland coached for 20 years at Eagle Grove, where his teams won three state team titles, one dual meet title and was state runner-up twice. He coached 71 state qualifiers, including 14 state champions.He also served as an official for 42 years.

Reiland offered his congratulations to the other inductees at the banquet.

“When I received a call from Bill Roths last year to tell me I was selected as an inductee (into the hall of fame), I told my wife I couldn’t believe it was happening, and she couldn’t, either,” Reiland said.

He noted the first time he wrestled was in seventh grade.“The only thing I remembered (about my first match) was that it didn’t last long, and the lights were really bright,” Reiland noted.

After qualifying for state as a senior in high school, he was excited to get the chance to wrestle at the University of Northern Iowa.Although he lost in the first round of the Division II Tournament as a sophomore, he placed at the tourney as a junior and senior.

Following college, Reiland was thrilled to have the chance to coach at Eagle Grove for 20 seasons.

“Wrestling has played a very important role in my life. It allowed me to meet guys such as Dave Harty and Chuck Patten. I thank the selection committee for this honor, and I’m very proud to be a member of the hall of fame,” Reiland said.

The final inductee of the night, Mark Sindlinger, was introduced by his former coach at Charles City, Jim Miller. Sindlinger won three state heavyweight titles at Charles City before going to the University of Iowa, where he was a two-sport athlete competing in football and wrestling.

“My parents really taught me how to be successful,”Sindlinger said. “I spent a lot of time watching wrestling meets (growing up),and I thank my mom for making me wear the head gear during wrestling matches.”

“After the first practice of my freshman year (at Charles City), I told my dad, ‘I haven’t had a beating like that before,’ and my dad said, ‘Good’. Going to extra workouts after that really made a big difference for me.

“Wrestling was a lot of fun for me, but it was also a lot of work. But as Coach Gable said, it teaches self-control and pride. I didn’t have a choice but to learn from the best, such as Coach Gable. Sports have really done a lot for me, and they have taught me how to be a good sport,” Sindlinger said.

Dennis Meirick concluded the banquet by congratulating all of the inductees, thanking the local businesses for their support and thanking everyone for coming to the banquet.

Below are pictures taken at the Cresco Welcome Center where wrestling fans were able to visit with the 2012 Inductees at the Iowa Wrestling Hall of Fame before the Banquet festivities that night.  Also included are photos taken at the banquet. 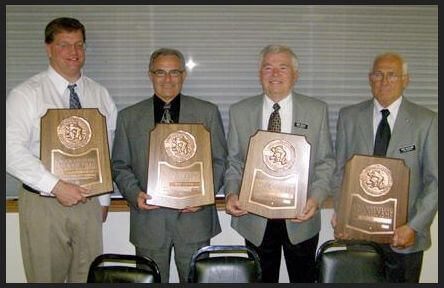 The newest members of the Iowa Wrestling Hall of Fame include, from left: Mark Sindlinger, Marv Reiland, Gene Doyle and Bob Buzzard. 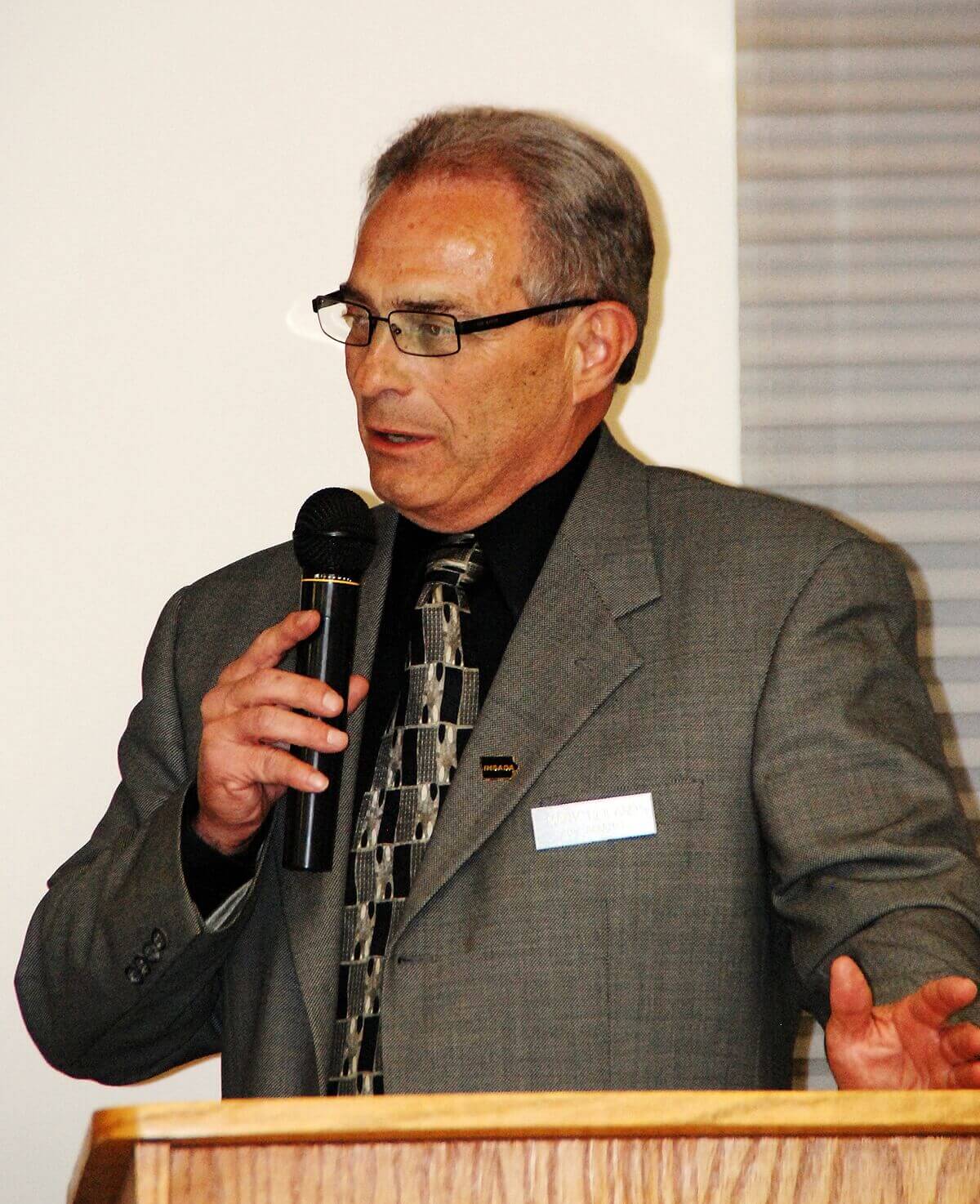 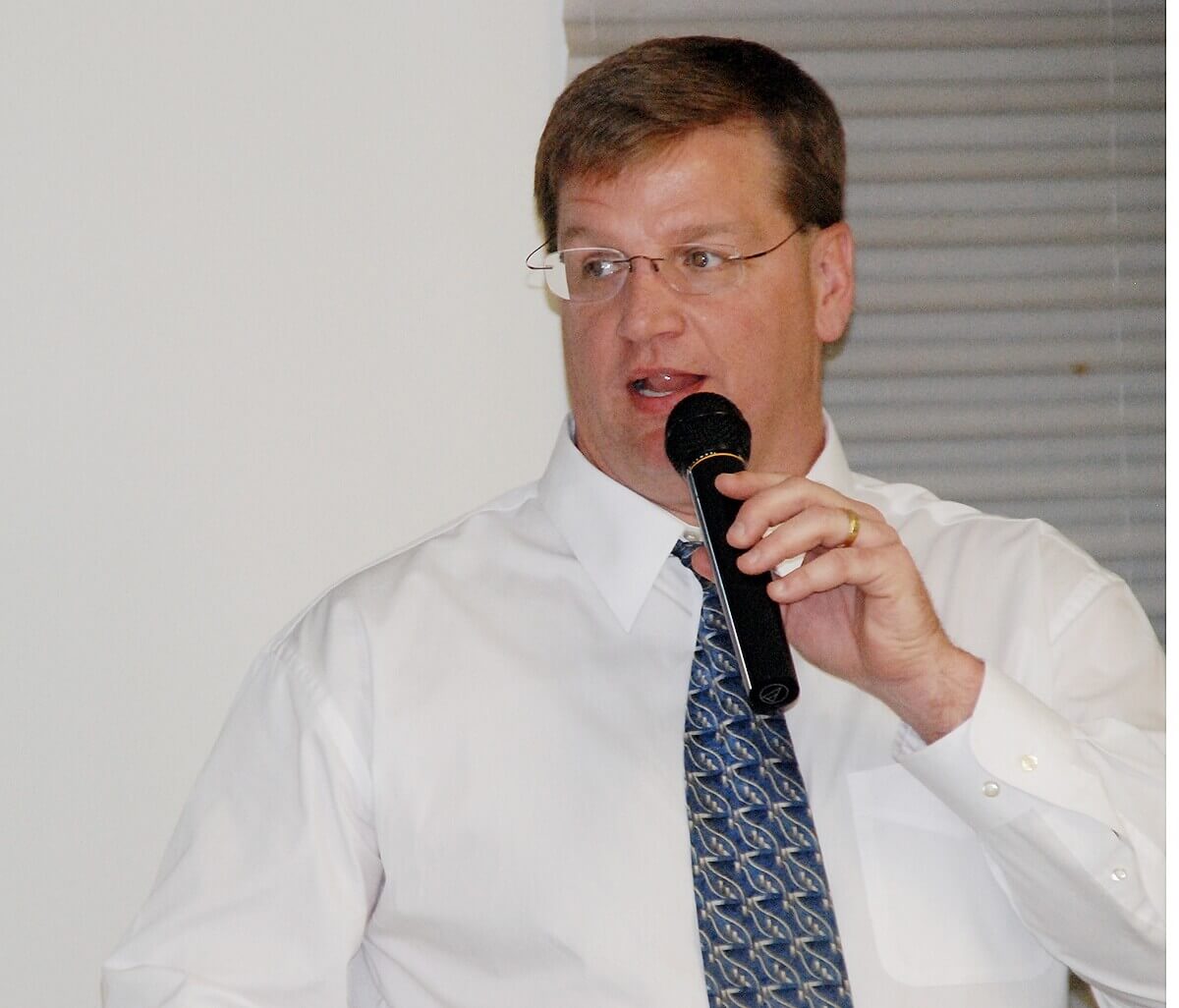 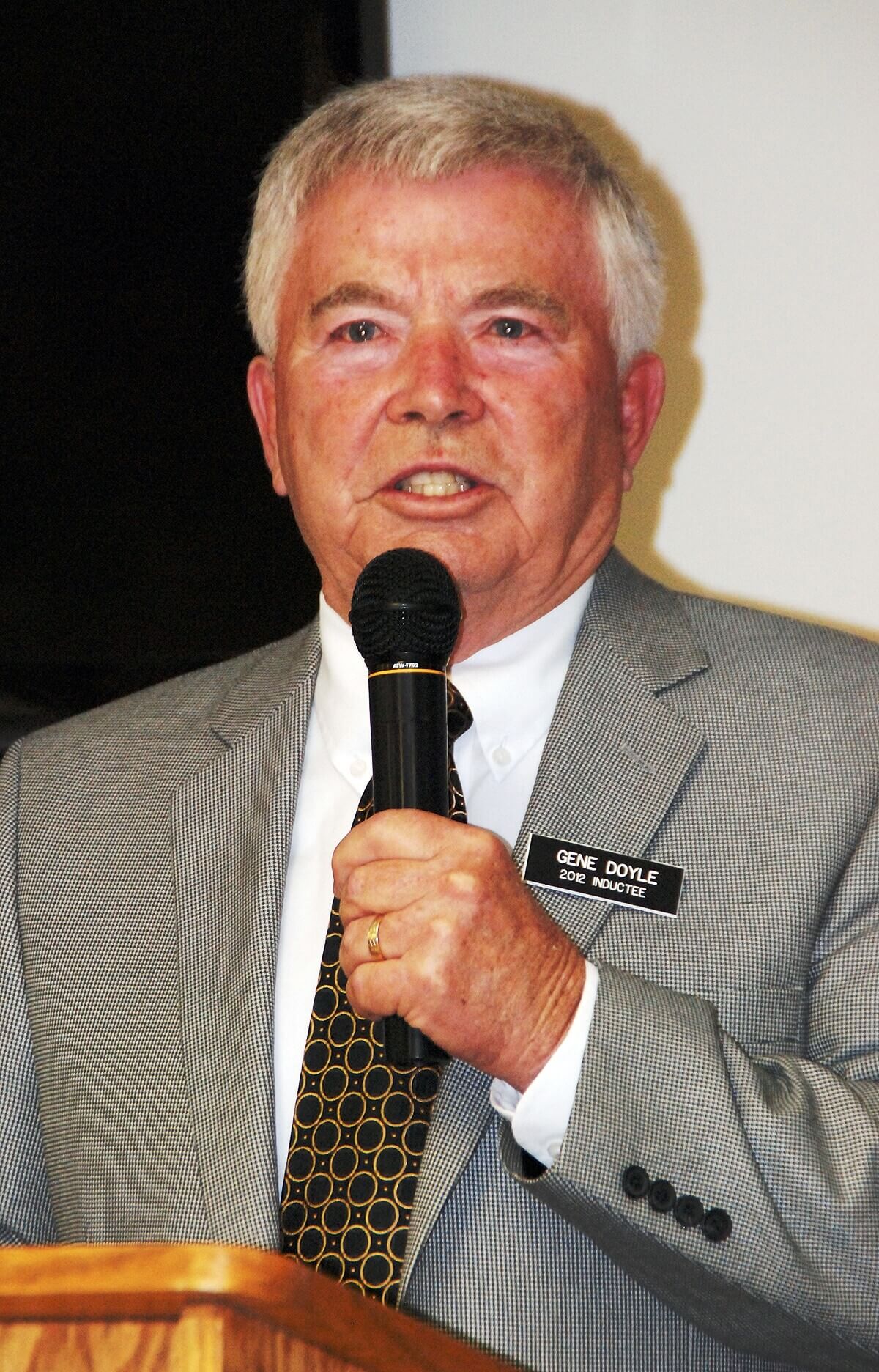 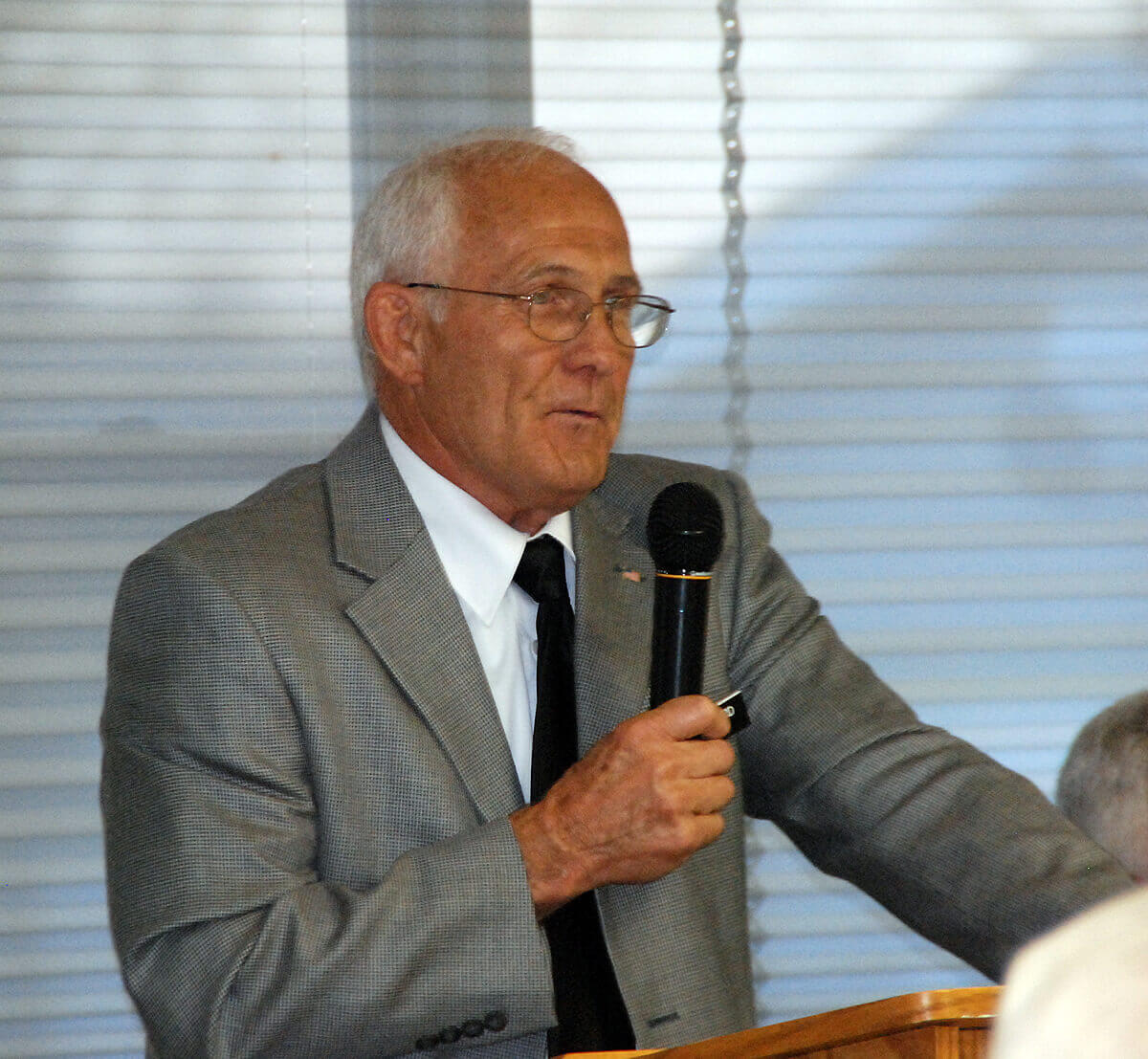 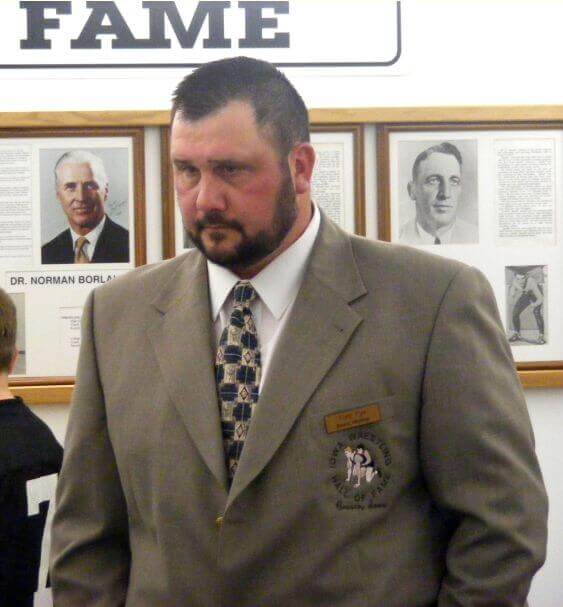 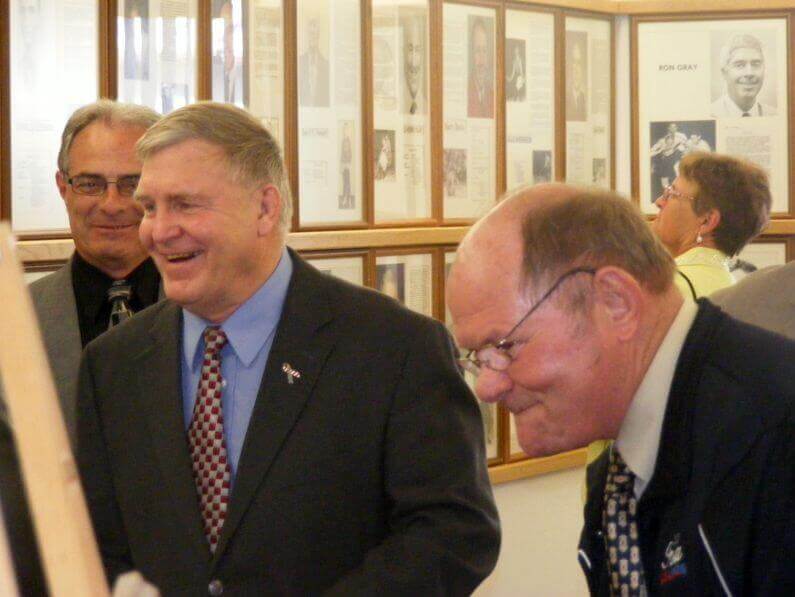 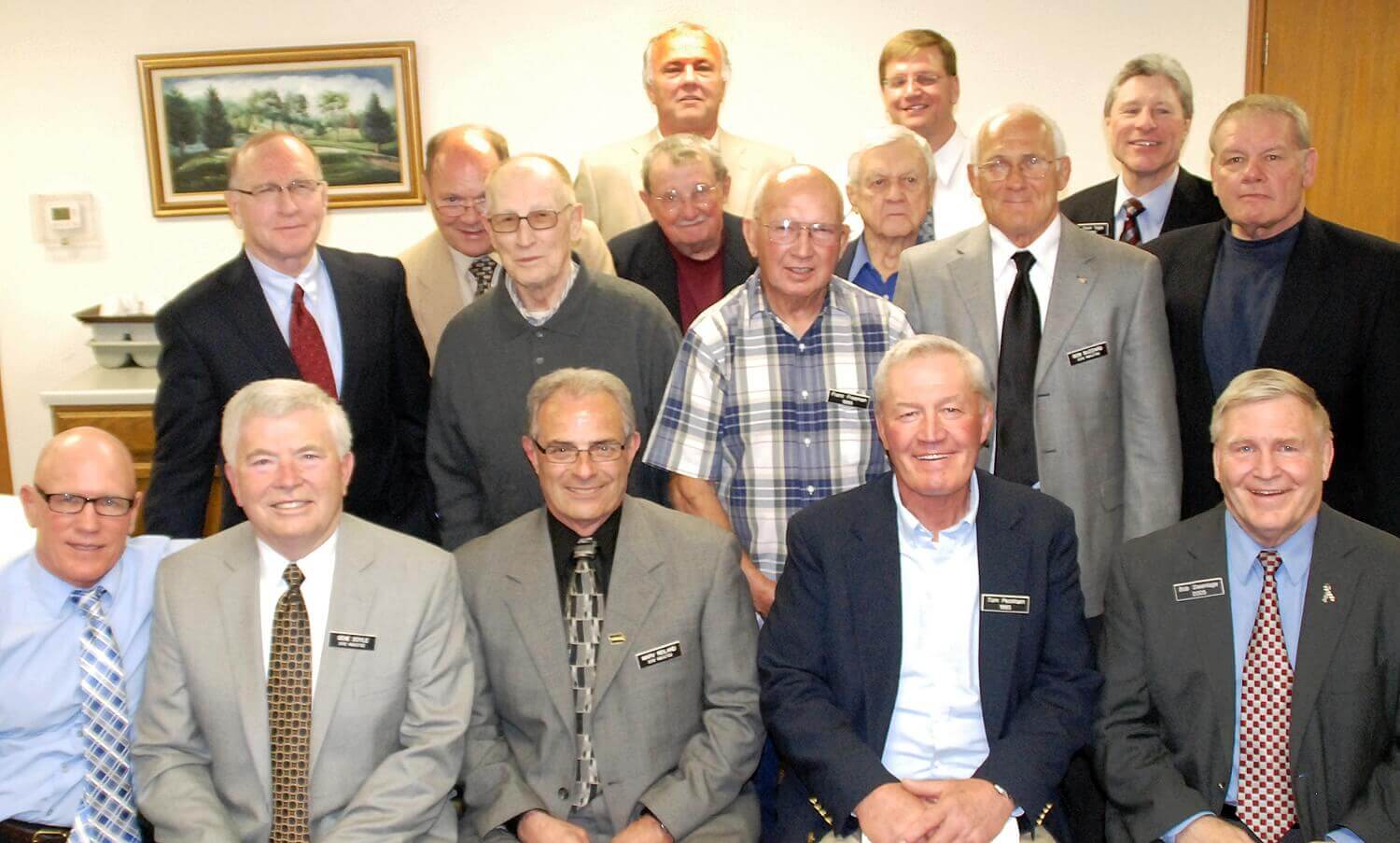 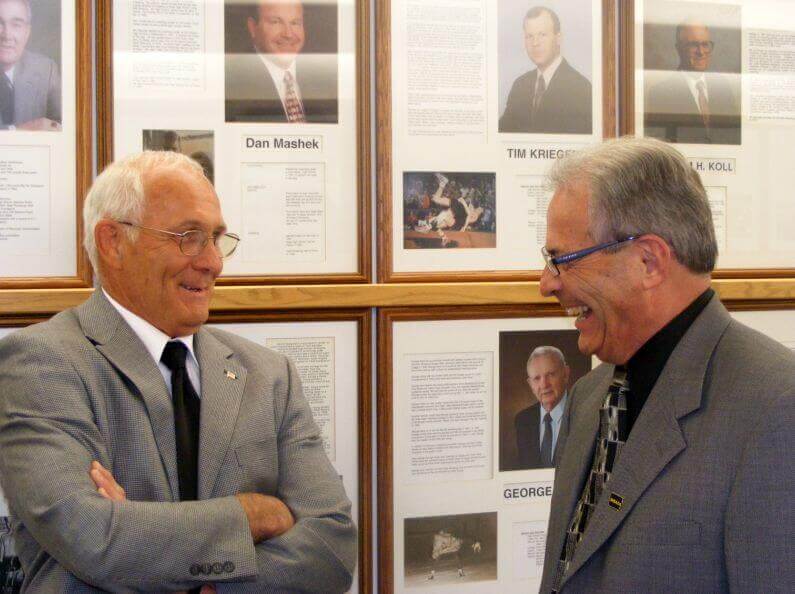 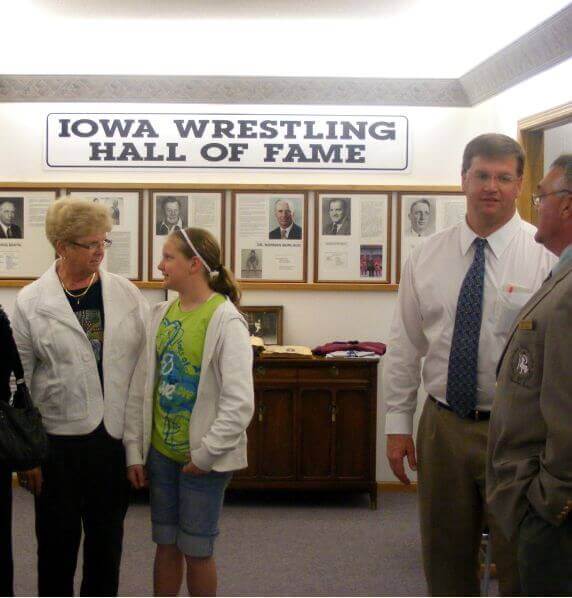 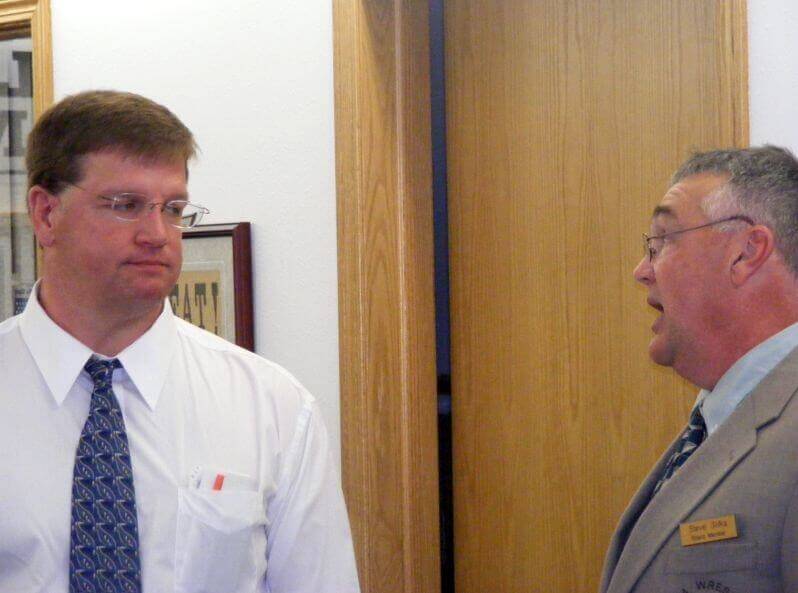 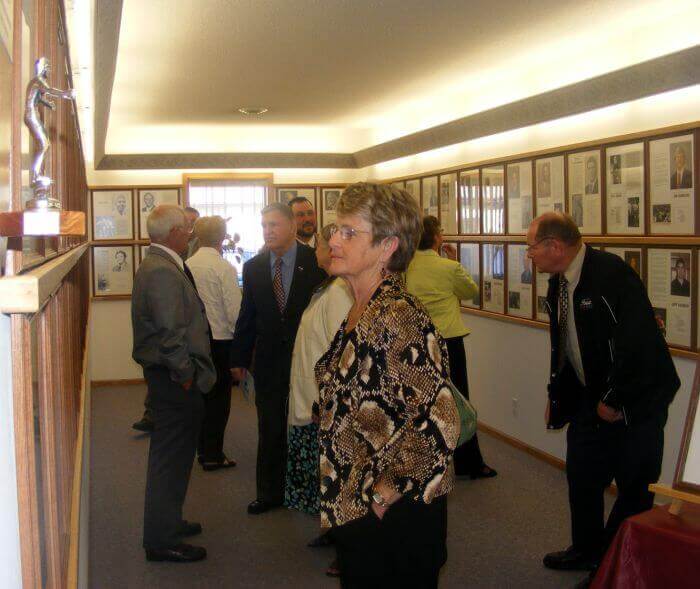 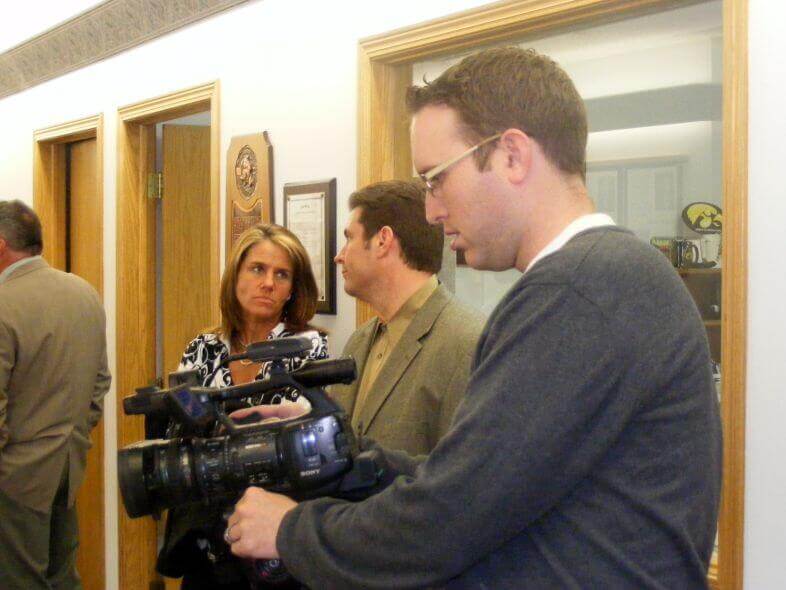 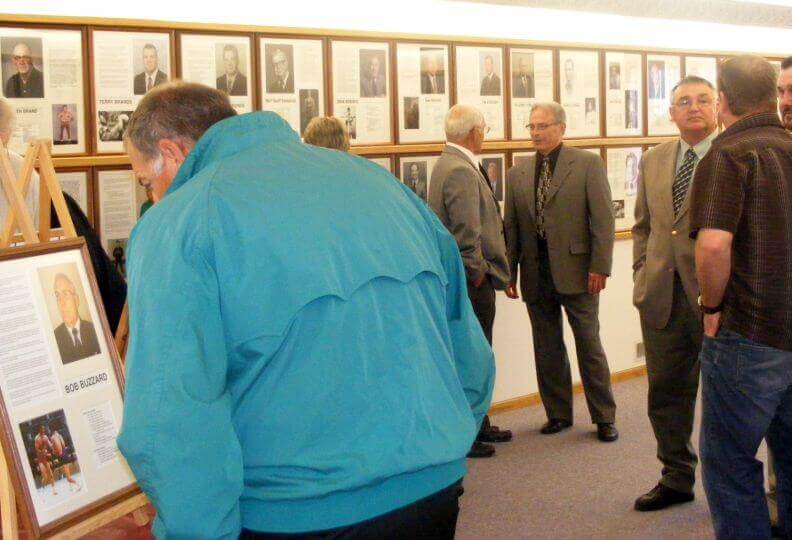 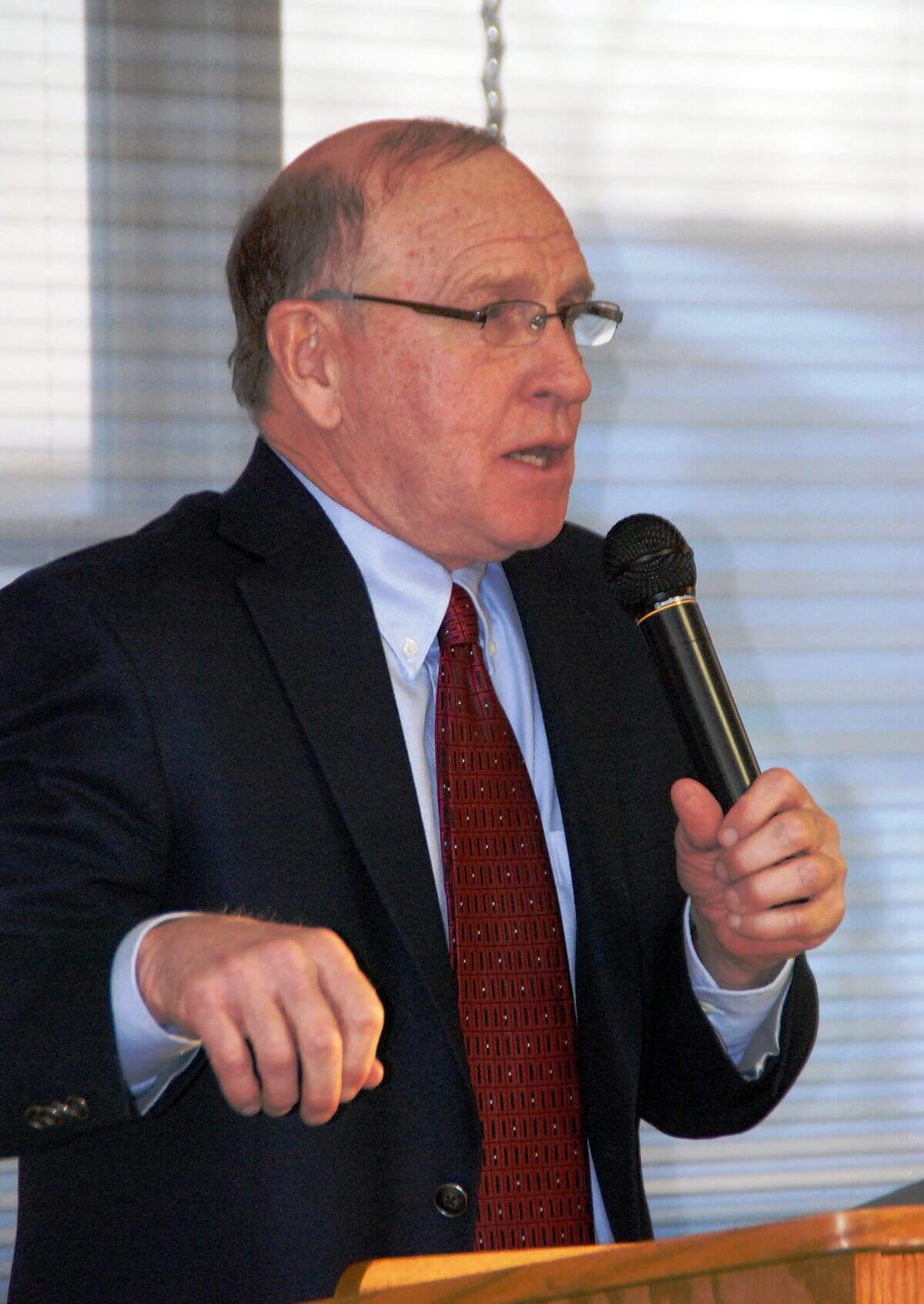 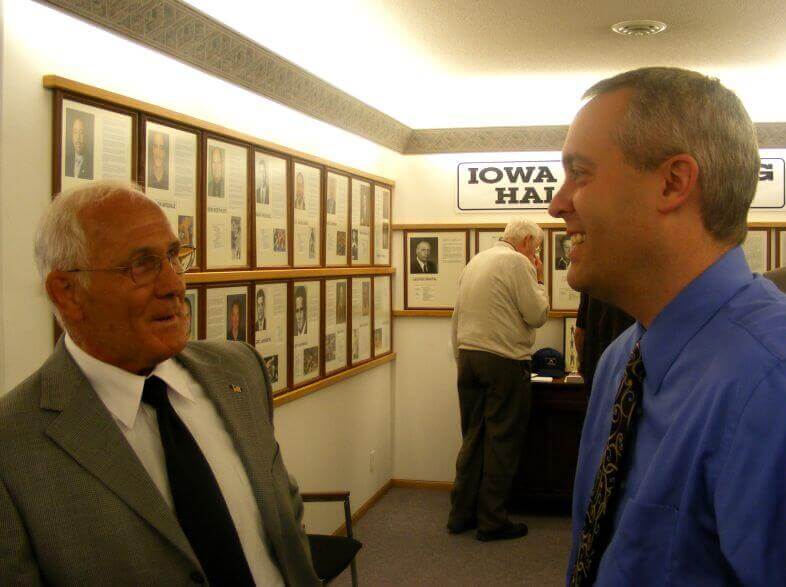 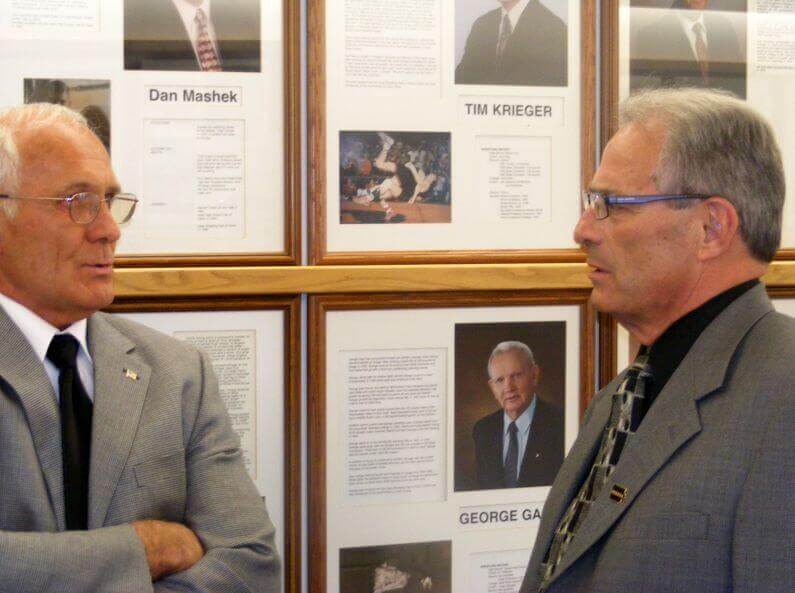 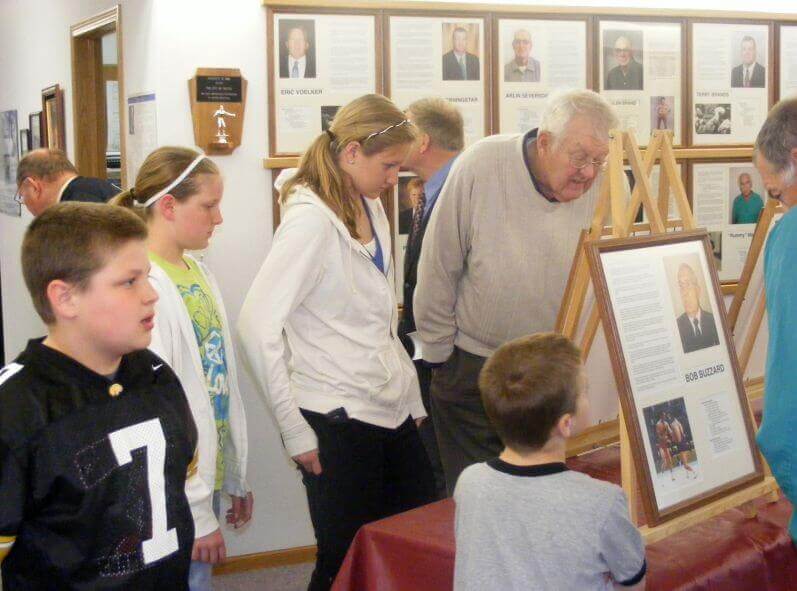